Notice: Function add_theme_support( 'html5' ) was called incorrectly. You need to pass an array of types. Please see Debugging in WordPress for more information. (This message was added in version 3.6.1.) in /home/kj8d9sfz7jzn/public_html/federalistpress.com/wp-includes/functions.php on line 5831
 Ann Romney Delivers Again 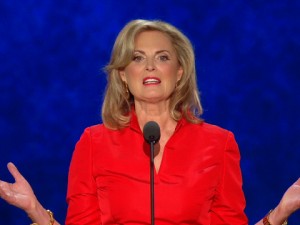 The Republican National Convention saw the beginning of its successful rise to power last night as Ann Romney stood before America and outlined the social and economic philosophies of herself and her husband, the Republican candidate for president, Mitt Romney. She began her speech with a theme that permeates their life: Love.

Mrs. Romney was elegant and visually stunning as she addressed the nation, focusing on the important calling of women in American society, especially as an overstressed economy has consistently burdened women in their roles as mothers and wives, and often, breadwinners.

“I love you women!” she exclaimed. “And I hear your voices.”

She shared some intimate details about her immigrant parents, as well as the personal struggles of her young family, beginning with a humble basement apartment, a “pasta and tuna fish” subsistence, and a desk made of an old door propped up on two sawhorses. Mitt Romney was portrayed as a man who worked hard to build his fledgling company into an American success story, putting tens of thousands of people to work and helping to build the retirement portfolios of a like number of hard working people.

Indeed, building on her love theme, Ann Romney described her husband as a generous man, one who gives from his heart, not to be seen and praised for his generosity. “Mitt doesn’t like to talk about how he has helped others because he sees it as a privilege, not a political talking point,” in what political observers will instantly recognize as a contrast with those who take credit for everything they can, even when credit isn’t deserved. Indeed, Mitt Romney comes from a far different background and philosophy–one that abhors self-aggrandizement–which makes him an outsider to D.C. politics.

In her landmark speech Mrs. Romney entirely debunked the left’s attempts to portray her husband as a greedy tycoon, and her as a spoiled millionaire’s wife. Indeed, they are the all-American family, an American success story. They are exactly what America needs, at this time when our standards and expectations have been lowered to the point of . . . malaise.