Notice: Function add_theme_support( 'html5' ) was called incorrectly. You need to pass an array of types. Please see Debugging in WordPress for more information. (This message was added in version 3.6.1.) in /home/kj8d9sfz7jzn/public_html/federalistpress.com/wp-includes/functions.php on line 5835
 Federalist Papers 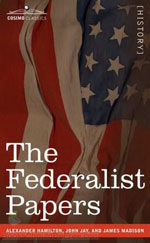 Have you ever wondered if it is actually possible to know the “original intent” of the Founding Fathers when they penned the U.S. Constitution? The Federalist Papers are a series of 85 articles explaining the proposed new national government and arguing for the ratification of the United States Constitution.

They were first published serially in New York City newspapers, and reprinted in several publications across the new nation so that the citizens of the proposed new governmental entity would know exactly what they were getting as they voiced their assent to the inception of the new national government. A compilation, called The Federalist, was published in 1788.

The articles were written by James Madison, Alexander Hamilton, and John Jay, under the pseudonym “Publius,” in honor of Roman consul Publius Valerius Publicola.

James Madison is generally credited as the father of the Constitution and became the fourth President of the United States. Hamilton was an influential delegate at the Constitutional Convention, and later the first Secretary of the Treasury. John Jay would become the first Chief Justice of the United States. Hamilton penned the majority and Madison made several significant contributions to the series. Jay, who fell ill early in the project, wrote only five.

Federalist No. 10 and Federalist No. 51 are generally regarded as the most influential of the 85 articles; 10 advocates for a large, strong republic and includes discussion on factions, 51 explains the need for separation of powers. Federalist No. 84 is also notable for its opposition to what later became the United States Bill of Rights.