Notice: Function add_theme_support( 'html5' ) was called incorrectly. You need to pass an array of types. Please see Debugging in WordPress for more information. (This message was added in version 3.6.1.) in /home/kj8d9sfz7jzn/public_html/federalistpress.com/wp-includes/functions.php on line 5831
 14 Injured in Campus Knife Attack 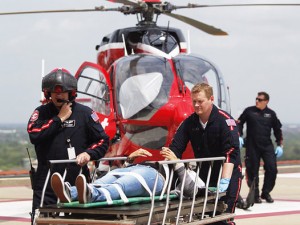 Over 12 people were stabbed Tuesday on the campus of Lone Star Community College campus in Cypress, Texas, after a male suspect reportedly used a small knife, ran from building to building and randomly attacked individuals along the way.Harris Country Sheriff Adrian Garcia said in a press conference Tuesday afternoon that the suspect, described as a young white male, has been taken into custody.

Garcia said officers responded to the campus after receiving a call about a male “on the loose” stabbing people. He said it was not immediately clear what type of weapon was used.

“Some of the details in the call slip did indicate that students or faculty were actively responding to work to subdue this individual,” Garcia said, describing the man as being about 21 years old and enrolled at the college. “So we’re proud of those folks, but we’re glad no one else is injured any more severely than they are.”

Garcia said buildings still were being searched Tuesday afternoon and that police could not release any further information as the investigation was still active and ongoing.

But department spokesman Thomas Gilliland did confirm, “It was the same suspect going from building to building.”

Garcia said of the 14 victims, two are in critical condition, four are in fair condition, but the conditions of the other eight victims remains unclear. Twelve of the victims in all were hospitalized and two refused treatment. Witnesses reported seeing students with stab wounds to the neck.

Police got the initial report at 11:15 a.m. A suspect with a knife was reported on the sprawling campus on the Northwest side of Houston and there were reports of multiple stab victims. The school was placed on lockdown. The length of the attack is unclear, but the suspect was reportedly taken down by a student.

The suspect, who witnesses say is a white male who has been seen on campus carrying a stuffed animal, reportedly told the tackling student “I give, I give,” and was promptly arrested by police.
Police could not immediately verify that report.

Local reports say a student in a classroom used an X-ACTO knife and began to attack fellow students and ran out of the room.

One student said the attack sounded like a rock concert and heard someone scream in pain. At that point, students went back into their classrooms, the student said.

Initial reports said there were two suspects, but police say it was likely to be one suspect who ran from different areas during the time of the attack.

“The initial reports said we have two suspects, but what I believe now is it was the same person running from building to building,” a police spokesman said at a press conference earlier on Tuesday.

Police are unaware of a motive in the attack.

A different Lone Star system campus was the site of a January shooting. Two people were wounded, and a 22-year-old man was charged with aggravated assault.

Published April 09, 2013 / FoxNews.com /The Associated Press contributed to this report.