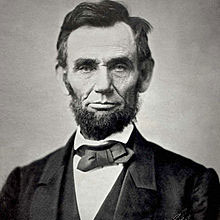 Thousands gathered Tuesday to ponder what the Gettysburg Address has meant to the nation on the Civil War battlefield where President Abraham Lincoln gave his famous speech that symbolized his presidency and the sacrifices made by Union and Confederate forces.

“Lincoln’s timeless words embodied and galvanized us as a nation,” Congressman Scott Perry, R-Pa., said at the event. “Everything we’ve achieved since that time…was born out of sacrifice of the soldiers that fought here and the patriots that followed through their footsteps without history.”

The event comes near the end of a momentous year for the park, city and college that share the name Gettysburg, as hundreds of thousands of visitors took part in historical re-enactments and ceremonies.

Lincoln’s Gettysburg Address — first delivered here nearly five months after the major battle that left tens of thousands of men wounded, dead or missing — will be read by a re-enactor to mark the anniversary. The ceremony included a wreath-laying at the Soldiers’ National Cemetery. There also will be a graveside salute to U.S. Colored Troops at noon, and a tree planting ceremony in the afternoon.

U.S. Supreme Court Justice Antonin Scalia is to swear in 16 new American citizens and join Corbett a luncheon in honor of a high school girl who won a contest with her essay about the importance the Gettysburg Address, park officials said.

Some visitors are honoring the speech as well as the men who fought in the battle. Tom Stack, 54, of Wilmington, Del., has an ancestor who fought and died at Gettysburg while serving with the 1st Minnesota Volunteer Regiment.

“It was an incredible time, with incredible individuals, on both sides, really,” Stack said Monday.

The short oration, which begins, “Four score and seven years ago,” was intended to mark the dedication of the cemetery at the site of the pivotal battle. But it also came as Lincoln’s own reasons for fighting the Civil War were evolving. He spoke of how democracy itself rested upon “the proposition that all men are created equal,” a profound and politically risky statement for the time. Slavery and the doctrine of states’ rights would not hold in the “more perfect union” of Lincoln’s vision.

It was not immediately recognized as a towering literary achievement. Just last week, The Patriot-News in nearby Harrisburg retracted a dismissive editorial about the speech published by its Civil War-era predecessor, The Harrisburg Patriot & Union. The newspaper now says it regrets the error of not seeing its “momentous importance, timeless eloquence and lasting significance.”

The ideals expressed in the speech also weren’t necessarily a reflection of reality. Only a few years after the war, a separate cemetery for black Civil War veterans was created in Gettysburg because they were “denied burial in the National Cemetery because of segregation policies,” according to a historical marker placed in 2003.

There are several related events at the park this week, including the “Gettysburg Address Gallery” at the park museum and visitor center. The exhibit includes pages with signatures of individuals who attended the 1863 Dedication Ceremony in Gettysburg and a letter and signed pardon from Lincoln.

The annual Remembrance Day Parade in Gettysburg will be held Saturday, featuring Union and Confederate re-enactors who will lay wreaths at the portions of the battlefield their units defended.

An estimated 235,000 people came to Gettysburg this year on or around the battle’s anniversary in July.

Published November 19, 2013 / FoxNews.com / The Associated Press contributed to this report.