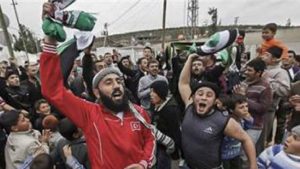 Data from the State Department recently revealed that at least 1,800 refugees from the seven Muslim-majority countries targeted by President Donald Trump’s January executive order on immigration and the U.S. refugee resettlement program have entered the United States since the courts lifted the order’s major restrictions.

According to analysis from the Pew Research Center, of those 1,800 refugees, the majority came from Syria, Iraq and Somalia.

Trump’s controversial executive order, signed on Jan. 27, sought to temporarily halt the U.S. refugee resettlement program for 120 days so his administration could develop a vetting process they felt comfortable with. In addition, the executive order temporarily barred people from seven Muslim-majority countries — Iraq, Iran, Syria, Sudan, Somalia, Libya and Yemen — from traveling to the U.S. for 90 days.

One week after Trump signed the executive order, a federal district judge in Washington State temporarily suspended the major parts of Trump’s order, effectively nullifying it. That decision was later upheld by the 9th Circuit Court of Appeals.

Since then, the Trump administration has said they likely wouldn’t take their legal battle to the Supreme Court, but instead issue a completely new order altogether. Still, that order has yet to be issued.

During the first full week of Trump’s presidency (Jan. 21-27), 870 refugees from the restricted countries entered the U.S., accounting for 43% of all refugee admissions during this time. The following week, Jan. 28 to Feb. 3, refugee admissions from the seven restricted countries all but stopped after Trump’s executive order took effect (excluding two refugees from Somalia and Iraq). They then resumed shortly after the federal courts stepped in.

In all, including refugees from countries with no travel restrictions, 6,095 refugees entered the U.S. during Trump’s first month in office (Jan. 21 to Feb. 17), a period that includes the week before he issued the travel order. Among these refugees, a total of 2,778 were Muslims (46%) and 2,610 are Christians (43%).

In total, Pew found that 2,733 refugees — or 45 percent in total — that entered the U.S. during Trump’s first month in office came from one of Trump’s seven targeted Muslim-majority nations.

But despite the courts temporarily halting the key parts of Trump’s executive order, there was one part they left intact: Trump’s order slashing the number of refugees the U.S. would accept in fiscal 2017 from 110,000 to 50,000, which, according to the Washington Post, already has refugee resettlement agencies laying off workers as the U.S. quickly approaches that limit.