Notice: Function add_theme_support( 'html5' ) was called incorrectly. You need to pass an array of types. Please see Debugging in WordPress for more information. (This message was added in version 3.6.1.) in /home/kj8d9sfz7jzn/public_html/federalistpress.com/wp-includes/functions.php on line 5831
 2016: Obama’s America a Must See 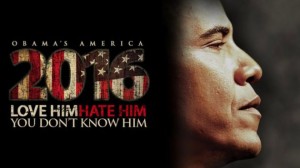 Spielberg producer Gerald R. Molen, with a list of production credits that include Jurassic Park, Schindler’s List, Hook, Minority Report, Twister, Days of Thunder, and Twister has brought his considerable talents and personal reputation to the political documentary 2016: Obama’s America.

The movie is based on the publications of College President Dinesh D’Souza, and examines the question, “If Barack Obama wins a second term, where will we be in 2016?”

D’Souza, born and raised in India himself, explains in the documentary that it is not until one comprehends Obama from the anti-colonialist views of his radical Kenyan father, whose larger-than-life influence on Obama’s childhood psyche helped steer the younger Obama into paths that seek to redistribute America’s wealth to the 99 percent of the rest of the world, that the entire picture of Obama’s core motivations becomes clear.

Anti-colonialism is a movement against nations who have exercised their might to rob weaker nations of their resources. The philosophy is closely aligned with communism and seeks to strip the wealthy nations of their gain and return it to the poorer nations from which it allegedly originated.

As Barack Hussein Obama II developed his worldview, it was under the close mentoring of a card-carrying American communist, which lasted for several years, at the insistence of his maternal grandfather. By his own admission, at college Obama likewise sought out communist and socialist companions and professors with whom he could commiserate America’s level of undeserved wealth and influence in the world.

The documentary’s assertions are backed up with eye witness interviews and accounts, as well as Obama’s own voice, taken from speeches and audio versions of his own books.

If the acts and decisions of Barack Hussein Obama II have seemed out of step with every other American president, Democrat or Republican, and appear to be a detriment to America, its economy and citizens, as well as to its allies while benefiting those who are unfriendly to us and seek our debasement, this documentary appears to present indisputable evidence of a very clear and present danger–living in the White house.