Notice: Function add_theme_support( 'html5' ) was called incorrectly. You need to pass an array of types. Please see Debugging in WordPress for more information. (This message was added in version 3.6.1.) in /home/kj8d9sfz7jzn/public_html/federalistpress.com/wp-includes/functions.php on line 5831
 8th Grader Arrested, Suspended for Wearing NRA T-Shirt 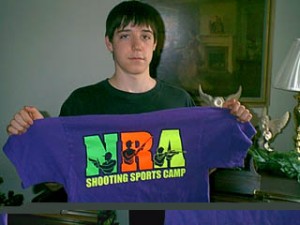 An eighth-grade student in West Virginia was reportedly arrested and suspended last week after getting into an argument with his teacher about a National Rifle Association T-shirt he wore to school.

WOWK-TV reports that Jared Marcum faces charges of obstruction and disturbing the education process for refusing to change the shirt, which shows a rifle and the slogan, “protect your right.”

Jared told the station the he was punished by officials at Logan Middle School after arguing about the shirt with his teacher, who reportedly objected to the image of the gun on the shirt.

“What they’re doing is trying to take away my rights, my freedom of speech and my Second Amendment,” Jared told the station.

Jared’s father, Allen Lardieri, told WOWK-TV he is upset his son was briefly jailed for something he believes was blown out of proportion.

“I don’t see how anybody would have an issue with a hunting rifle and NRA put on a T-shirt, especially when policy doesn’t forbid it,” Lardieri told the station.

On the first day of Jared’s suspension, some of his friends reportedly wore shirts displaying images of firearms and at least one was told by an educator to change their attire, according to the report.

Benjamin White, an attorney handling Jared’s case, told the station he is working on getting the charges dropped and plans to file a federal or civil lawsuit.