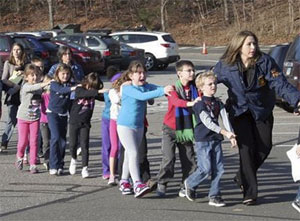 A few days ago a young Hispanic man from Portland, Oregon stole a semi-automatic rifle and went into a suburban shopping mall to kill as many people as he could. Coward.

Every few weeks or months a similar case occurs, with a psycho nobody who wants to become somebody, if only posthumously, who takes an armload of ammo into a public place where firearms are forbidden, and shoots as many of the innocent and defenseless as he can find. Coward.

Unfolding at this very minute is a similar incident, and authorities are reporting that at least 26 people, including 18 children, were killed this morning when a gunman opened fire inside a Connecticut elementary school.

America had gone from a nation of good people living under a Christian brotherly creed, to a nation of self-absorbed, self-centered, pleasure-seeking, thrill-seeking, lazy, indulgent, indolent slobs.

Our streets and homes are filled with people who care about no one and nothing but themselves, and they don’t care what their own foolishness or indolence costs those around them.  Gimme, gimme, gimme is their creed, and they’ve elected a president who has successfully tapped into that weakness.

Illegal drugs have gripped our nation’s youth for decades, and turned our streets and minority neighborhoods into war zones. Immorality and infidelity has overtaken our national belief in a Creator, and His eminence in our culture and lives. Yet we are told that we must accept the different lifestyle choices of those who are unlike ourselves, and suffer the incursions into our society by the diversity of others.

With much of our nation unemployed due to the policies of those who have fundamentally transformed our country, culture and society, sitting on couches playing video games that promote wandering the streets to murder those they encounter, is it any wonder that we have mindless zombies roaming our streets?

At some point decent, hard-working Americans are going to have to make a choice to take back their streets, take back their lives, and take back their government, and forcefully put down the rebellion of darkness and evil that now overshadows this once-great nation.  For me and mine, that day is today.  We will begin to take our weapons with us, even where the signs tell us they are not welcome.  If we encounter a shooter trying to make a name for himself, we will ensure that he gets no more than a single bullet off before the wrath of the righteous is felt in his bowels.  This is the day we begin to root out this evil.

Are there any decent people left out there?  If so, this would be a good time to speak up.