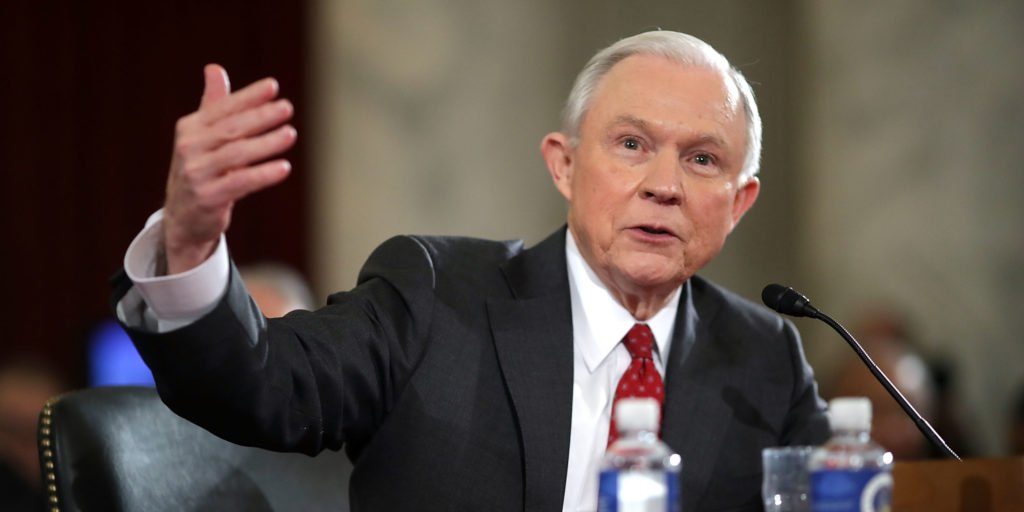 Attorney General Jeff Sessions, in dramatic Senate testimony, on Tuesday decried suggestions he colluded with Russian officials during the 2016 campaign as an “appalling and detestable lie” — while staunchly defending his role in the firing of former FBI Director James Comey.

“I have never met with or had any conversations with any Russians or any foreign officials concerning any type of interference with any campaign or election,” Sessions told the Senate Intelligence Committee. “I have no knowledge of any such conversations by anyone connected to the Trump campaign.”

The attorney general addressed the same Senate panel that heard last week from Comey, becoming the highest-ranking official to testify in the Russia investigation.

Democrats used the forum to pepper Sessions with tough questions, at times accusing him of “stonewalling” and impeding the congressional probe.

The normally reserved Sessions showed his feisty side in response, pushing back on what he called the “secret innuendo” being leaked about his contact with Russians and challenging portions of Comey’s testimony.

In a fiery opening statement, Sessions specifically contradicted Comey’s claims that he remained silent when the former FBI director expressed his concerns over a meeting with President Trump.

“I responded to his comment by agreeing that the FBI and Department of Justice needed to be careful to follow Department policies regarding appropriate contacts with the White House,” Sessions said, adding he was confident that Comey understood the rules on communicating with the White House about ongoing investigations.

Sessions had earlier recused himself from all matters relating to the Russia investigation after it was reported he had failed to disclose two meetings with Russian Ambassador Sergey Kislyak.

Oregon Democratic Sen. Ron Wyden asked Sessions about conflicting accounts rising from Comey’s testimony and claims that there was something “problematic” about Sessions’ role before his recusal.

Asked what issues might be problematic, Sessions raised his voice: “Why don’t you tell me? There are none, Senator Wyden, there are none … This is a secret innuendo being leaked out there about me, and I don’t appreciate it.”

Democrats appeared to be looking for evidence that Sessions’ contact with Russian officials was more significant than previously thought. Sessions has said neither of the two disclosed encounters had anything to with the Trump campaign in 2016 and that the meetings took place in his role as a lawmaker.

Sessions flatly denied a third meeting with the Russian liaison at the Mayflower Hotel in Washington during a campaign event in April.

“I did not have any private meetings nor do I recall any conversations with any Russian officials at the Mayflower Hotel,” he said. “I did not attend any meetings at that event. Prior to the speech, I attended a reception with my staff that included at least two dozen people and President Trump. Though I do recall several conversations I had during that pre-speech reception, I do not have any recollection of meeting or talking to the Russian ambassador or any other Russian officials.”

Tuesday was Sessions’ first time in the witness seat since his confirmation hearing in February.

Sessions’ testimony came on the heels of Comey’s explosive testimony last week on Russia’s medding in U.S. elections and allegations that Trump tried to kill a related investigation.

During Comey’s hearing, he hinted at Sessions’ role in the controversy.

“We were also aware of facts that I cannot discuss in an open setting that would make his continued engagement in a Russia investigation problematic,” Comey said.

The Justice Department and Sessions himself have pushed back on such suggestions. Sessions also has faced questions from Democrats about why he was involved in recommending Comey’s firing even after he recused himself from the Russia investigation. However, Sessions said Tuesday he had a duty to oversee the Justice Department and FBI, and a “fresh start” was needed at the FBI.

He also said he has the right to defend himself.

“I recused myself from any investigation into the campaign for president. I did not recuse myself from defending my honor against scurrilous and false allegations,” he said.

Unlike Comey, who bluntly said he tried to avoid one-on-one encounters with Trump and began documenting their interactions, Sessions is a staunch supporter of the president.

Sessions was one of the first members of Congress to endorse Trump and was then-candidate Trump’s adviser on almost every major decision and policy proposal pushed on the campaign trail.

Florida Sen. Marco Rubio asked Sessions whether Trump had recorded conversations he had in the White House with Comey – something Trump hinted he had done then walked back.

Comey said last week that he hopes there are tapes and encouraged the White House to release them.

“I do not [know],” Sessions said when asked whether he knows whether the president records his conversations.

Comey had also said that Sessions had lingered in the Oval Office following a group meeting, just before the private encounter during which Comey has said Trump asked him to pull back on his investigation of former National Security Adviser Michael Flynn. As Trump tried to shoo everyone out to talk alone with Comey, Sessions lingered, in Comey’s account. Comey suggested this indicated the attorney general’s awareness that it was improper for Trump and Comey to meet alone together, given the specter of the Department of Justice’s investigation into Russia’s election meddling and possible ties with the Trump campaign.

But Sessions disputed that was why he lingered, suggesting there was really nothing to it.

“I do recall being one of the last ones to leave, I don’t know how that occurred,” Sessions said. “I eventually left.”

By Barnini Chakraborty  The Associated Press contributed to this report.