Notice: Function add_theme_support( 'html5' ) was called incorrectly. You need to pass an array of types. Please see Debugging in WordPress for more information. (This message was added in version 3.6.1.) in /home/kj8d9sfz7jzn/public_html/federalistpress.com/wp-includes/functions.php on line 5831
 ABC, CBS, NBC Initially Fail to Cover Donna Brazile’s Claim That the DNC Rigged Primary for Clinton 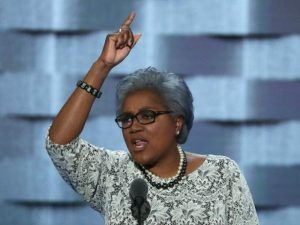 Brazile claimed in an excerpt from her soon-to-be-released book that Clinton’s campaign had control over the DNC’s pocketbook and strategy in exchange for paying down the Party’s 2012 presidential campaign debt, explaining that the Party skewed the primary in Clinton’s favor through backroom financial deals so she could easily beat Bernie Sanders.

Despite these bombshell allegations, ABC, CBS, and NBC did not cover these revelations on their evening newscasts, even though the excerpt, taken from Brazile’s new book Hacks: The Inside Story of the Break-ins and Breakdowns That Put Donald Trump in the White House, had been published more than 12 hours prior.

Sen. Elizabeth Warren (D-MA) spoke about the DNC rigging scandal on CNN at 4:40 p.m. Eastern, but ABC’s World News Tonight, CBS’s Evening News, and NBC Nightly News did not feature any segment about the subject on their 6:30 p.m. Eastern programs.

Instead, CBS broadcast a segment on the Niger ambush, while ABC and NBC led off with segments on President Trump’s proposed tax cut.

Trump called out the three networks for not giving any airtime to the DNC rigging revelations:

Media watchdog organizations, such as the Media Research Center, took notice of the networks’ failure to cover Brazile’s allegations.

The Donna Brazile story is astonishing. The media loves to tell stories of Republican discord. Here’s the woman who was the interim head of the DNC saying Bernie Sanders got screwed by the party and Team Clinton. No matter how much the media wants to hide that, it’s a huge issue and will impact future elections.

Brazile took over as interim chairperson of the DNC in July 2016 after party insiders ousted Rep. Debbie Wasserman Schultz (D-FL) as chair on the evening before the DNC convention in Philadelphia.

After Fox News and CNN aired segments about Brazile’s DNC rigging claims and the president tweeted about the subject, CBS and NBC published stories on their websites Friday afternoon about the matter. ABC published a story about it Friday night.