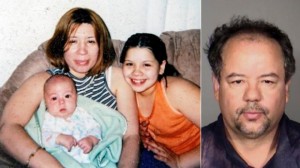 CLEVELAND –  The man accused of holding three women captive for a decade in his Cleveland home terrorized the mother of his children, frequently beating her, playing twisted psychological games and locking her indoors in the years before their relationship disintegrated, her relatives say.

Several relatives of Grimilda Figueroa, who left Ariel Castro years ago and died after a long illness last year, painted a nightmarish portrait of Castro’s family life as authorities made public horrifying details of the abuse endured by the imprisoned women.

In interviews with The Associated Press on Thursday, the relatives described Castro as a “monster” who abused his wife and locked his family inside their own home. Their views were at odds with those of some of Castro’s family and a neighbor, who knew the former school bus driver only as a happy and respectful man.

Figueroa’s relatives said Castro savagely beat her, pushing her down a flight of stairs, breaking her nose and dislocating her shoulder, among other injuries. Her sister, Elida Caraballo, said Castro once shoved Figueroa into a cardboard box and closed the flaps over her head.

“He told her, `You stay there until I tell you to get out,”‘ said Caraballo, who cried as she recounted her late sister’s torment. “That’s when I got scared and I ran downstairs to get my parents.”

Prosecutors said Thursday they may seek the death penalty against Castro as police charged that he impregnated one of his captives at least five times and made her miscarry by starving her and punching her in the belly. The allegations were contained in a police report that also said another one of the women, Amanda Berry, was forced to give birth in a plastic kiddie pool.

Cuyahoga County prosecutor Timothy McGinty said his office will decide whether to bring aggravated murder charges, punishable by death, in connection with the pregnancies that were terminated by force. McGinty said Castro will be charged for every act of sexual violence, assault and other crimes committed against the women, suggesting the counts could number in the hundreds, if not thousands.

Castro, 52, is being held on $8 million bail under a suicide watch in jail, where he is charged with rape and kidnapping.

“Capital punishment must be reserved for those crimes that are truly the worst examples of human conduct,” McGinty said. “The reality is we still have brutal criminals in our midst who have no respect for the rule of law or human life.”

The three women said Castro chained them up in the basement but eventually let them live on the home’s second floor. Each woman told a similar story about being abducted after accepting a ride from him.

Berry, now 27, told officers that she was forced to give birth in a plastic pool in the house so it would be easier to clean up. Berry said that none of the women — or her 6-year-old child — had ever been to a doctor during their captivity.

Michelle Knight, now 32, said her five pregnancies ended after Castro starved her for at least two weeks and “repeatedly punched her in the stomach until she miscarried.” She also said Castro forced her to deliver Berry’s baby under threat of death if the baby died. When the newborn stopped breathing, Knight said she revived her through mouth-to-mouth resuscitation.

During his brief arraignment Thursday, Castro tried to hide his face, tucking his chin inside his shirt collar. He appeared to close his eyes during the hearing and awkwardly signed documents while handcuffed. He did not speak or enter a plea.

Kathleen DeMetz, a public defender assigned to represent him at the hearing, didn’t comment on his guilt or innocence or object when prosecutors recommended that bail be set at $5 million. The judge, instead, ordered Castro held on $8 million bail.

Castro was arrested Monday, when Berry broke out of his run-down house and called 911 while he was away. Police found the two other women inside. The women had vanished separately between 2002 and 2004, when they 14, 16 and 20.

Police then entered the house and found the other women, who flung themselves into the officers’ arms.

Berry and former captive Gina DeJesus, 22, went home with relatives on Wednesday. Knight was reported in good condition at a Cleveland hospital.

Castro’s two brothers, who were arrested with him but later cleared of involvement in the case, appeared in court on unrelated charges Thursday and were released.

Figueroa’s relatives said Castro often forced her to remain inside her home and forbade her from using the telephone. After warning her not to leave, he would test her to see if she obeyed, Caraballo said.

Some relatives of Castro have said they were shocked by the allegations against him. An uncle, Julio Castro, said it’s been difficult news to absorb.

“Of course we have taken it hard,” he said. “We only knew one Ariel, my sweet nephew. He was a sweet, happy person, a musician. We didn’t have the slightest idea of the second person in him.”

Juan Perez, who lives two doors down from Castro, said Castro was always happy and respectful. “He gained trust with the kids and with the parents. You can only do that if you’re nice,” Perez said.

On a recent visit to Castro’s rundown home, his friend Ricky Sanchez said he heard noises “like banging on a wall” and noticed four or five locks on the outside door. While he was there, a little girl came out from the kitchen and stared at him. But she didn’t say anything.

“When I was about to leave, I tried to open the door,” he said. “I couldn’t even, because there were so many locks in there.”

Relatives say that in 1996, Figueroa finally left Castro after he hit her for the last time. After one particularly bad beating, Figueroa ran outside with one of her sons, crying out to neighbors just as the captive women did.

“The neighbors went across the street to get her,” Elida Caraballo said. “And that was the last time she ever stepped in the house.”