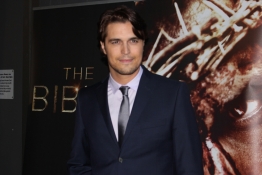 Portuguese actor Diogo Morgado, who plays Jesus in the highly-popular “The Bible” miniseries, recently responded to the recent “Hot Jesus” nickname given to him on social media platforms, saying that although he is flattered, he would prefer to affect someone on a spiritual level.

“I take the [Hot Jesus] nickname as a compliment obviously, but I’m waiting for the good stuff, and the good stuff for me is if someone just nabbed me on the shoulder and said ‘look you did a pretty good job,'” Morgado said in a recent interview with USA Today.

“Something like this more than anything, something like playing Jesus, for me, if only I can have one person go straight to me and say ‘you touched me, and you brought me something I thought I’d lost,’ that would be my best compliment,” Morgado added.

The Portuguese actor’s portrayal of Jesus on the History Channel’s “The Bible” miniseries sparked a wave of Twitter comments with the trending hashtag “HotJesus,” referring to Morgado’s good looks.

The actor, who in spite of his 16 years in television and film was virtually unknown outside of Portugal before his role as Jesus, went on to tell USA Today that he hopes his portrayal of Jesus will bring hope to those living in these “confused times.”

“I think we’re living really confused times. You turn on the news and there’s a lot of violence, but it’s not just violence, it’s getting to the insane point of violence when you don’t have any reasonable explanation for stuff that is happening nowadays. It’s getting to a point that it’s alarming,” Morgado said.

“I think people are just needing for something positive, something that can touch them in a way that can bring them some hope.”

This isn’t the first time Morgado has been complimented for his good looks.

British actor Darwin Shaw, who plays the character of Peter in “The Bible” miniseries, told The Christian Post in a previous interview that along with being a kind person, Morgado is also “incredibly handsome.”

“Diogo is one of the most generous, compassionate and kind actors I have ever met – he’s also incredibly handsome. He’s a great guy. To work with him was a privilege because once we were together, there was already a real chemistry, a real brotherhood, and I hope that is something that comes across on camera,” Shaw told CP.

“The Bible” miniseries, which is produced by Mark Burnett of “Survivor” fame and his wife, Roma Downey from “Touched By An Angel,” has received continuous, record-breaking ratings since its debut on March 3, making it the most watched program in all of television on Sunday nights.

The show will conclude on March 31, Easter Sunday, with a two-hour episode featuring Jesus’ crucifixion and resurrection.

“The Bible” airs on the History Channel at 8 p.m. Eastern Time on Sunday.