Notice: Function add_theme_support( 'html5' ) was called incorrectly. You need to pass an array of types. Please see Debugging in WordPress for more information. (This message was added in version 3.6.1.) in /home/kj8d9sfz7jzn/public_html/federalistpress.com/wp-includes/functions.php on line 5831
 Another Islamic Terror Attack with a Large Truck in Germany 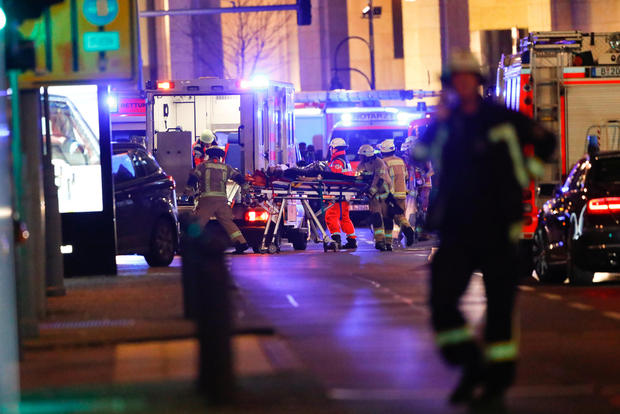 Paramedics work at the site of an accident at a Christmas market on Breitscheidplatz square near the fashionable Kurfuerstendamm avenue in the west of Berlin, Germany, December 19, 2016. REUTERS/Fabrizio Bensch

A truck plowed into a crowded Christmas market in Berlin on Monday, killing at least nine and injuring more than 50 in what police believe was a deliberate attack, and one that was a chilling echo of the July incident in Nice in which 86 people were slain by a terrorist.

A large Scania truck rammed into the market outside the capital’s popular Christmas market at the Kaiser Wilhelm Memorial Church on Monday evening.

The man suspected to be the driver of the truck was arrested several hundred years from the scene and in being questions by police, police siad.

Police spokesman Winfried Wenzel told ZDF public television that the man was arrested near the scene.

No further details were immediately available.

Footage of the scene showed a large Scania truck with its windshield smashed out on the sidewalk alongside the market, with a swarm of ambulances nearby. A large Christmas tree with a gold star on top was toppled over nearby in the street.

Witness Mike Fox told The Associated Press at the scene that the large truck missed him by only about three meters as it drove into the market, tearing through tables and wooden stands.

“It was definitely deliberate,” said the tourist from Birmingham, England.

He said he helped people who appeared to have broken limbs, and that others were trapped under Christmas stands.

Police and rescue workers swarmed the scene after the incident blocking access to the market itself, and firetrucks and ambulances whizzed by.

In recent weeks, the State Department has warned Americans traveling to Europe that Christmas markets and open-air gatherings could be the target of terrorists’ attacks.

“It’s obvious that the threat will always remain,” he said, “but with the holidays and many of the Christmas markets that are normally set up this time of year, it proves to be a tempting soft target.”

Prosecutors in Ludwigshafen said a 17-year-old boy of Iraqi heritage attempted to blow up a device at the local Christmas market on November 26, the Local reported. The device failed to detonate and tried again on December 5.

The device was hidden in a rucksack filed with nails and placed in a bush near the town hall.

Prosecutors said a pedestrian spotted the bag and alerted police, who carried out a controlled explosion.

According to Focus magazine, the 12-year-old boy was born in Rhineland-Palatinate in 2004 and had encouraged to carry out the attack by an as-of-yet unknown member of ISIS.