Notice: Function add_theme_support( 'html5' ) was called incorrectly. You need to pass an array of types. Please see Debugging in WordPress for more information. (This message was added in version 3.6.1.) in /home/kj8d9sfz7jzn/public_html/federalistpress.com/wp-includes/functions.php on line 5831
 Another Massacre – Is Gun Control the Answer? 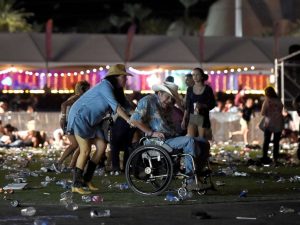 Minutes after the Sunday night massacre on the Las Vegas strip we were hearing calls for legislation that will curtail citizens’ rights to keep and bear arms.

Is this reasonable? If we pass tighter gun control laws, will it solve the problem? Will it prevent a similar massacre in the future?

Unfortunately, no amount of legislation can prevent this type of cowardly attack on innocent victims. In the present case, the perpetrator passed rigorous background checks and took legal, single-shot rifles and modified them into automatic weapons, with the specific intent to wipe out as many concert goers as possible.

For those who don’t know this: The weapons used by the perpetrator (I will not immortalize his name by publishing it), were unlawful. Outlawed weapons. It is that simple. There are already laws in place preventing this very activity. As we can see, these laws entirely fail to prevent these attacks.

Here is the reality about guns. Most rifles are not “assault” weapons. Very few of these fully-automatic weapons are in existence, and they are simply not available to the general public. When I was a young university student, I worked my way through college working as a machinist. One job was with a fledgling Australian rifle manufacturer who had just set up a very small shop in my small American town–Kimber Rifles. Kimber is now a very respected brand, but it was barely known in the states at the time. As a machinist working for Kimber, I learned all about the working mechanics of rifles. One thing I learned was how simple it is to convert a semi-automatic rifle to a fully automatic weapon. It is a very simple modification. It is also a federal felony–and if you make that small modification, you will spend many years in a federal prison. It’s that simple.

If making the possession and use of automatic weapons unlawful fails to prevent this massacre, what law could possibly prevent it? The only possible way to legislate such a thing is to entirely eliminate the existence of all firearms.

Is eliminating all firearms doable? Even if we could, which we cannot, would it be a good idea? Why did our founders preserve our natural right to keep and bear arms in our Constitution?

Answer: because they KNEW that without this particular right enshrined and forever protected, all of the other rights enumerated in the Constitution would eventually be obliterated by overreaching government. The right to keep and bear arms is fundamentally the citizens’ protection from government. I would submit that any totalitarian government that has ever come to control and enslave its people, first disarmed them. Undisputed. So if you hear people talking about gun control, stop and realize who they are, and the natural conclusion of the path they espouse.

So if we cannot legislate away cowardly attacks on innocent citizens, what is the answer? I will tell you this–we live in a world where self-indulgence is fostered without limitation, and where violence is an everyday experience. The Great Society enclaves of the left–Detroit, Chicago, Oakland–these are killing zones. Minority citizens are murdering one another in droves. Thousands are victims of murderous violence, every year. Our society has devolved to a point where thousands of minority babies are culled in abortion clinics daily, and so many of those who survive the butcher’s knife are destined to fatherless homes, prison, and violent death. These are the problems that plague this nation. [pullquote]Our crisis is one of Character, not gun control. [/pullquote]

Until this nation reconsiders its move toward selfishness and self-indulgence, our natural instincts of community and protecting those around us will continue to decline. All of these maniacs who suddenly decide to end it all in a blaze of infamous glory are sick products of a sick society. We need to begin healing the sickness that is overtaking our people if we want to end the wanton violence that is becoming epidemic. That is the only possible answer.

James Thompson is a noted ghostwriter and political commentator.