Notice: Function add_theme_support( 'html5' ) was called incorrectly. You need to pass an array of types. Please see Debugging in WordPress for more information. (This message was added in version 3.6.1.) in /home/kj8d9sfz7jzn/public_html/federalistpress.com/wp-includes/functions.php on line 5831
 AP Chief Says Phone Taps “Unconstitutional” 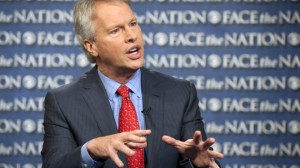 Associated Press President Gary Pruitt said Sunday the Justice Department sent a strong – and negative — message to future sources that the government would go after them if they spoke to the press. It’s a move Pruitt called not only unconstitutional, but damaging to the ideal of a free press in the country.“It will hurt,” he said on CBS’ “Face the Nation.” “We’re already seeing some impact. Officials are saying they’re reluctant to talk.”

The Justice Department sought phone records for a two-month period from more than 20 phone lines in four bureaus,including Washington and New York.

“Their rules require them to come to us first,” Pruitt said.

But the Justice Department maintains that telling the AP would have posed a threat to their investigation.

Last week, Attorney General Eric Holder faced aggressive questioning at a hearing by the GOP-led House Judiciary Committee amid the outcry over the gathering of phone records.

Holder said he had recused himself from the AP investigation and that it was Deputy Attorney General James Cole’s decision to authorize the subpoena. Holder had said he supported the decision and said that the department had seized the phone records in an effort to find out who leaked confidential information about a foiled terror attack in Yemen.

The DOJ went a step further and said the AP’s actions put Americans at risk, something the news organization strongly refuted.

“Rather than talk to us in advance, they seized these phone records in secret, saying that notifying us would compromise their investigation,” Pruitt said in a statement on the AP’s website.

Sen. John Cornyn, who was also on “Face The Nation,” called for Holder’s resignation. “I think it’s time for him to go,” he said.