Notice: Function add_theme_support( 'html5' ) was called incorrectly. You need to pass an array of types. Please see Debugging in WordPress for more information. (This message was added in version 3.6.1.) in /home/kj8d9sfz7jzn/public_html/federalistpress.com/wp-includes/functions.php on line 5831
 AP Imposes PC Gag on Itself

WASHINGTON –  The Associated Press is being accused of trying to influence the immigration debate following a decision to stop using the term “illegal immigrant” in its coverage — despite the fact it is still being used by U.S. government officials including Homeland Security Secretary Janet Napolitano.The decision comes as a bipartisan group of senators prepares to introduce sweeping immigration legislation which is expected to propose a pathway to citizenship for millions of illegal immigrants.

Indeed, the move by the influential wire service is being hailed as a victory by immigrant advocacy groups.

The conservative Media Research Center, though, described the change as a “politically-correct mumble.”

by Senior Vice President and Executive Editor Kathleen Carroll, who said the change came out of conversations with people who opposed the term.

“Our goal always is to use the most precise and accurate words so that the meaning is clear to any reader anywhere,” Carroll said.

“The Stylebook no longer sanctions the term ‘illegal immigrant’ or the use of ‘illegal’ to describe a person,” Carroll said. “Instead, it tells users that ‘illegal’ should describe only an action, such as living in or immigrating to a country illegally.”

Still, some are wondering why the AP decided to nix the phrase when high-ranking government officials don’t seem to have a problem with it.

Last week, Napolitano told reporters that she didn’t “really get caught up in the vocabulary wars.”

“They are immigrants who are here illegally, that’s an illegal immigrant,” she said.

Previously, the AP rejected the term “undocumented immigrants,” favored by some activists, as inaccurate. 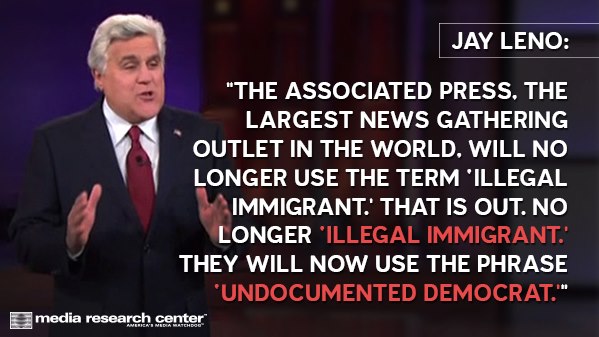 Changes to the AP Stylebook, which is updated annually, have important and widespread repercussions in the media. The changes don’t just influence the AP’s writing, which is found in publications around the world. The book is the primary writing style guide for journalists in both print and broadcast.

The Congressional Hispanic Caucus, a group of 27 House Democrats, applauded the AP’s decision and called it “a great step forward.”

On a more tongue-in-cheek note, ALIPAC announced Wednesday it would be changing its “style” preference in all future articles to “illegal invaders” — “in response to the totalitarian steps by the Associated Press to make ‘illegal immigrants’ disappear with the stroke of a pen just days before legislation attempting to do the same is expected to be filed in Washington, DC, by the ‘Gang of 8.'”

Comedian Jay Leno joked that the phrase should be replaced with “undocumented Democrat.”

The AP said its decision to stop using the term “illegal immigrants” is part of a broader shift away from labeling people and toward labeling behavior — for example, referring to people “diagnosed with schizophrenia” instead of “schizophrenics.”

In 1986, the AP’s then-stylebook editor Christopher French used the same reasoning to support the wire service’s decision to use “anti-abortion” instead of “pro-life,” and abortion rights instead of “pro-abortion” or “pro-choice.”

“Until a specific rule is agreed upon at AP, the following existing guideline is being applied: Avoid labeling groups or individuals and instead spend an extra sentence on a more specific description,” French said at the time.

In February, it reversed a decision on gay marriage, saying people in same-sex marriages could now be referred to as “husbands” and “wives.”

Several news organizations are also dropping the term “illegal immigrant” from their reporting. CNN, ABC News and NBC News have all parted ways with the phrase in the past few years.

The debate on whether to change the term at The New York Times is still being debated, public editor Margaret Sullivan wrote in an article Tuesday.

“The Times, for the past couple of months, has also been considering changes to its stylebook entry on this term and will probably announce them to staff members this week,” she wrote.

“From what I can gather, The Times’s changes will not be nearly as sweeping as The AP’s,” Sullivan said, adding, “I would be surprised to see The Times ban the use of ‘illegal immigrant,’ as the AP has done.”