Notice: Function add_theme_support( 'html5' ) was called incorrectly. You need to pass an array of types. Please see Debugging in WordPress for more information. (This message was added in version 3.6.1.) in /home/kj8d9sfz7jzn/public_html/federalistpress.com/wp-includes/functions.php on line 5831
 ARGENTINE CARDINAL JORGE BERGOGLIO ELECTED POPE, WILL BE KNOWN AS POPE FRANCIS

White smoke billowed from the Vatican’s Sistine Chapel Wednesday, indicating the cardinals have selected a new pope after two days of voting. 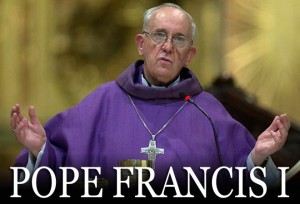 Cardinals have elected a successor to Benedict XVI, who stunned the Catholic world last month by becoming the first pope in 600 years to resign. Crowds packing St. Peter’s Square were seen waving flags and were cheering the announcement as bells were ringing.

Chants of “Long live the pope!” arose from the throngs of faithful, many with tears in their eyes. Crowds went wild as the Vatican and Italian military bands marched through the square and up the steps of the basilica, followed by Swiss Guards in silver helmets and full regalia.

The new pope, who has yet to be identified, became the winner after receiving at least 77 votes, which is more than two thirds of the cardinals.

The new pope is expected to appear on the balcony of St. Peter’s Basilica within an hour of the vote, after a church official announces “Habemus Papum” — “We have a pope” — and gives the name of the new pontiff in Latin.

Currently inside St. Peter’s Basilica, the elected cardinal will have been asked “Do you accept your canonical election as Supreme Pontiff?”

After giving his approval, the new pope is then asked which name he would like to be called, and other cardinals will approach him to make acts of homage and obedience.

The new pope will also have to be fitted into new robes, and there will be some time taken for prayer and reflection.

Cardinal Protodeacon Jean-Louis Pierre Tauran, of France, will then step out on the balcony of St. Peter’s Basilica and reveal the pope’s identity to the world.

Elected on the fifth ballot, the new pope was chosen in one of the fastest conclaves in years, remarkable given there was no clear front-runner going into the vote and that the church had been in turmoil following the upheaval unleashed by Pope Benedict XVI’s surprise resignation.

The conclave also played out against revelations of mismanagement, petty bickering, infighting and corruption in the Holy See bureaucracy. Those revelations, exposed by the leaks of papal documents last year, had divided the College of Cardinals into camps seeking a radical reform of the Holy See’s governance and those defending the status quo.

The names mentioned most often as “papabile” — a cardinal who has the stuff of a pope — include Cardinal Angelo Scola, the archbishop of Milan, an intellect in the vein of Benedict but with a more outgoing personality, and Cardinal Marc Ouellet, the Canadian head of the Vatican’s important bishops’ office who is also scholarly but reserved like Benedict.

Brazilian Cardinal Odilo Scherer is liked by the Vatican bureaucracy but not by all of his countrymen. And Cardinal Peter Erdo of Hungary has the backing of European cardinals who have twice elected him as head of the European bishops’ conference.

On the more pastoral side is Cardinal Sean O’Malley of Boston, the favorite of the Italian press, and Cardinal Timothy Dolan, the back-slapping, outgoing archbishop of New York who has admitted himself that his Italian is pretty bad — a drawback for a job that is conducted almost exclusively in the language.

For comparison’s sake, cardinals elected Benedict XVI on the fourth ballot in 2005 — but he was the clear front-runner going into the vote. Pope John Paul II was elected on the eighth ballot in 1978 to become the first non-Italian pope in 455 years.

The Vatican spokesman, the Rev. Federico Lombardi said it was a “good hypothesis” that the new pope would be installed next Tuesday, on the feast of St. Joseph, patron saint of the universal church. The installation Mass is attended by heads of state from around the world, requiring at least a few days’ notice.

Benedict XVI would not attend, he said.

Thousands of people braved a chilly rain on Wednesday morning to watch the 6-foot-high copper chimney on the chapel roof for the smoke signals telling them whether the cardinals had settled on a choice. Nuns recited the rosary, while children splashed in puddles.

The Vatican on Wednesday divulged the secret recipe used: potassium perchlorate, anthracene, which is a derivative of coal tar, and sulfur for the black smoke; potassium chlorate, lactose and a pine resin for the white smoke.

The chemicals were contained in five units of a cartridge that is placed inside the stove of the Sistine Chapel. When activated, the five blocks ignite one after another for about a minute apiece, creating the steady stream of smoke that accompanies the natural smoke from the burned ballot papers.

Despite the great plumes of white and black smoke that poured out of the chimney, neither the Sistine frescoes nor the cardinals inside the chapel suffered any smoke damage, Lombardi said.