Notice: Function add_theme_support( 'html5' ) was called incorrectly. You need to pass an array of types. Please see Debugging in WordPress for more information. (This message was added in version 3.6.1.) in /home/kj8d9sfz7jzn/public_html/federalistpress.com/wp-includes/functions.php on line 5831
 At Least 26 Killed in Mass Shooting at Texas Church 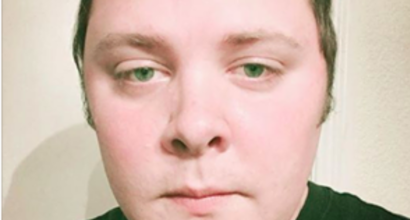 At least 26 people were killed in Texas, with many more wounded, after a gunman opened fire at a church outside San Antonio on Sunday, the state’s governor confirmed.

Texas Attorney General Ken Paxton said up to 27 people were killed and “many more” wounded after a man walked into the church around 11:30 a.m. on Sunday and opened fire at the crowd of people.

Emergency personnel respond to a fatal shooting at a Baptist church in Sutherland Springs, Texas, Sunday, Nov. 5, 2017.  (KSAT via AP)

If the number of people dead is confirmed, Sunday’s shooting would be the deadliest at a church in modern U.S. history.

A possible motive was unclear. Kelly lived in a suburb of San Antonio and didn’t appear to be linked to organized terrorist groups, a U.S. official told The Associated Press. The official said investigators were looking at social media posts Kelley may have made in the days before Sunday’s attack, including one that appeared to show a semiautomatic weapon. 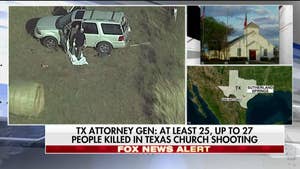 “It is horrible,” Wilson County Commissioner Larry Wiley told Fox News of the massacre. “It appears someone walked in and started shooting.”

The church’s pastor, Frank Pomeroy, said his 14-year-old daughter was killed in the shooting, according to ABC News.

“We have accepted a multiple number of patients from the shooting,” Megan Posey, a spokeswoman for Connally Memorial Medical Center in Floresville, 15 miles from church, told Fox News. She said she did not have a specific number. She said doctors were assessing the patients.

Helicopters and emergency personnel were seen arriving at the scene. The FBI is also on scene.

Law enforcement officials stand next to a covered body at the scene of a fatal shooting at the First Baptist Church in Sutherland Springs, Texas, on Sunday, Nov. 5, 2017.  (Nick Wagner/Austin American-Statesman via AP)

The gunman, according to Wiley, was killed roughly five miles away in Guadalupe County after being cornered by deputies.

Texas Attorney General Ken Paxton told Fox News that “people never think” a shooting like this can “happen in their communities.”

“In a small town, … I can imagine that these people are devastated. And everyone in the community is going to … have some type of close relationship” to those either killed or injured at the First Baptist Church.

He added it’s “hard to justify why anyone would do this.”

“This is horrific for our tiny little tight-knit town,” Alena Berlanga, who lives 10 minutes outside of Sutherland Springs told The Associated Press. “Everybody’s going to be affected and everybody knows someone who’s affected.”

President Trump, who’s currently traveling in Asia, tweeted: “May God be w/ the people of Sutherland Springs, Texas. The FBI & law enforcement are on the scene. I am monitoring the situation from Japan.”

Texas Gov. Greg Abbott said in a statement that “While the details of this horrific act are still under investigation, Cecilia and I want to send our sincerest thoughts and prayers to all those who have been affected by this evil act.”

“I want to thank law enforcement for their response and ask that all Texans pray for the Sutherland Springs community during this time of mourning and loss,” the statement read.

Sutherland Springs has a population of about 400 residents.

Sunday’s shooting comes just over a month after 58 people were killed and hundreds injured on Oct. 1 after a gunman opened fire on a country music festival in Las Vegas.

This is a developing story. Check back for updates. Fox News’ Robert Gearty, Jake Gibson, Rick Leventhal and The Associated Press contributed to this report.