Notice: Function add_theme_support( 'html5' ) was called incorrectly. You need to pass an array of types. Please see Debugging in WordPress for more information. (This message was added in version 3.6.1.) in /home/kj8d9sfz7jzn/public_html/federalistpress.com/wp-includes/functions.php on line 5831
 Benedict Roberts and Stare Decisis 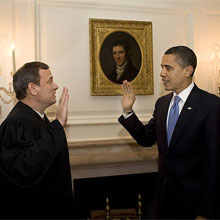 Supreme Court Chief Justice John Roberts exploded from the closet last week, revealing himself for the undercover leftist that he is, forever propelling the US into an Orwellian nightmare of government control and loss of personal liberty.

As the White House braced for a Supreme Court ruling on its Health Care legislation, which is not only extremely unpopular among voters, but had been telegraphed as facially unconstitutional by a majority of the Court in oral arguments, only a few die-hard socialists believed the act would be upheld upon judicial review by the Court. White House spokesman Jay Carney was already carrying out the left’s Talking Points Memo agenda of trying to saddle the GOP with the idea of the unconstitutional mandate, which forced Americans to buy a government mandated commodity, or suffer a penalty for disobedience.

The usual luke-warm judicial slug on the Court, Justice Kennedy, was thought to be the only conservative-leaning justice with the poor judgment to actually consider such an expansion of government power. He had made it clear during oral arguments, however, that even he was opposed to such an exponentially compounded expansion of government intrusion into the lives of American citizens. As the ruling came down, all of us, left and right, were shocked that Chief Justice John Roberts had actually made himself the swing vote to uphold the draconian law, shifting heretofore unconstitutional powers to the federal government.

Since that fateful day last week we have heard members of the left and their media propaganda outlets spiking the ball in celebration. We have simultaneously heard those on the right analyzing Justice Roberts’ written majority opinion, incredulous, sifting for some scintilla of logic or 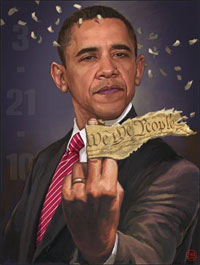 constitutional authority to make some sort of sense of it all. Perhaps the dear boy was telegraphing a method of ensuring Obama’s defeat in November, we have heard.

In fact, no such response for the ruling is possible. What many pundits fail to understand is the concept of stare decisis. This is the principle that once the Court has decided a constitutional principle, it remains decided–forever!

Indeed, the law of the land will always be that the federal government has no restrictions on what it can force the American people and the states to do, as long as it can be imposed under the taxing authority. The implications of this contorted theory of constitutional law cannot be overstated. The long-term ramifications of this unmitigated power shift are incomprehensible, and WILL become a source of unspeakable sorrow for this people in years and decades to come.

The Constitution written by our Founding Fathers is no more. The Tenth Amendment is dead.

Now, we are at the fork in the road.  We either follow Obama and his socialists down the path they offer, or we turn them out of office, forever, and put those into office who value the personal liberty we obtained and fought to maintain in every war since the Revolution.

Perhaps the time has inexorably arrived that we must re-invoke the wisdom of one of those Founders:

“The tree of liberty must be refreshed from time to time with the blood of patriots and tyrants.”
Thomas Jefferson