Notice: Function add_theme_support( 'html5' ) was called incorrectly. You need to pass an array of types. Please see Debugging in WordPress for more information. (This message was added in version 3.6.1.) in /home/kj8d9sfz7jzn/public_html/federalistpress.com/wp-includes/functions.php on line 5831
 BENGHAZI ‘TRAP’: Whistle-Blower Tells of ‘Being Baited’ Into an Ambush 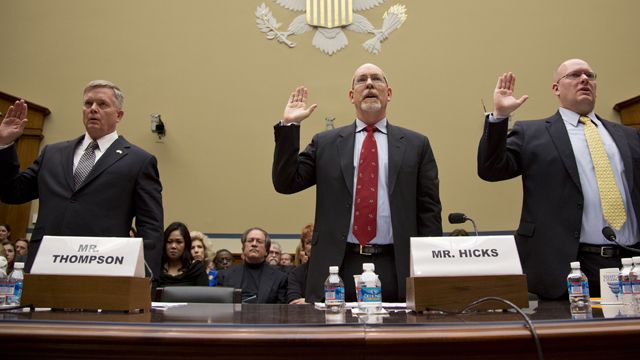 A key Benghazi whistle-blower, responding to Democratic claims that the prolonged scrutiny over the administration’s botched talking points is unwarranted, testified Wednesday that the early mischaracterization of the attack may have actually hurt the FBI’s investigation.

The claim was one of several new accounts given at Wednesday’s high-profile hearing where three whistle-blowers testified.

Democrats, while giving deference to the officials and their version of events, used the hearing to try and deflect criticism away from the administration. In particular, they rejected the notion that early talking points on the attack were deliberately changed, to downplay terrorism, for political reasons.

But the substance of the claims Wednesday could serve to re-open questions about that deadly night — and specifically about the initial claim by U.N. Ambassador Susan Rice that the attack was triggered by a protest over an anti-Islam film.

‘I definitely believe that it negatively affected our ability to get the FBI team quickly to Benghazi.’ – Greg Hicks, former deputy chief of mission in Libya

Greg Hicks, the deputy chief of mission in Libya who became the top U.S. diplomat in the country after Ambassador Chris Stevens was killed, was asked to respond to former Secretary of State Hillary Clinton’s statement at a prior hearing asking “what difference” do the questions over the talking points make.

Hicks argued that Rice’s comments so insulted the Libyan president — since they contradicted his Sept. 16 claims that the attack was premeditated — that it slowed the FBI’s investigation.

“President Magariaf was insulted in front of his own people, in front of the world. His credibility was reduced,” Hicks said, adding that the president was apparently “still steamed” two weeks later.

This bad blood, he claimed, contributed to the FBI team being stuck in Tripoli for about 17 days.

“I definitely believe that it negatively affected our ability to get the FBI team quickly to Benghazi,” he said, adding that the U.S. could not even get the Libyans to secure the crime scene during that time.

As for Rice’s comments that Sunday, when she repeatedly cited the video as the trigger for the attack, Hicks said his “jaw dropped” when he heard that.

“I was stunned,” Hicks said. “My jaw dropped, and I was embarrassed.”

He said Rice never talked to him before those appearances.

Hicks said the only information coming out of his team was that there was an “attack” on the consulate. “The YouTube video was a non-event in Libya,” he said.

He also claimed that, when he asked a superior about the interviews, he was told “he should not proceed” with his questions. He was later given a “blistering critique” of his management style and effectively demoted to “desk officer,” he claimed.

Hicks’ testimony marked some of the most detailed of any delivered Wednesday. He and others also suggested the State Department’s internal review into the attack was lacking. Hicks said when he was interviewed by the group, a stenographer was not present.

In hours of testimony, the witnesses recounted in great detail what happened in eastern Libya on Sept. 11 and how U.S. personnel came under a series of attacks that left four Americans dead. Though Democratic officials have argued the attack has been thoroughly investigated and that the hearing Wednesday was political in nature, the claims challenged several long-standing assertions by the Obama administration.

The witnesses criticized the lax security at the Benghazi site in the run-up to the attack, and suggested the military did not do all it good to respond to the scene that night despite claims to the contrary.

Hicks also revealed that it appeared some were trying to lure even more U.S. personnel into a separate “ambush” while the attack was still being carried out. He described how, as diplomatic officials were trying to find out what happened to Stevens, they were receiving phone calls from supposed tipsters saying they knew where the ambassador was and urging Americans to come get him.

“We suspected that we were being baited into a trap,” Hicks said, adding that he did not want to send anybody into what he suspected was an “ambush.”

Getting choked up, Hicks described how the Libyan prime minister later called him to tell him Stevens was in fact dead. “I think it’s the saddest phone call I’ve ever had in my life,” he said.

At the very beginning of the attack, before Stevens went missing and was later found dead, Hicks said his team believed it was terrorism. He said a regional security officer rushed into his villa yelling, “Greg, Greg, the consulate’s under attack.”

He then spoke by phone with Stevens who told him the same: “Greg, we’re under attack.”

After enduring a night of attacks on the U.S. consulate, Hicks said the team departed at dawn for the nearby annex — shortly after they arrived, “the mortars came.”

Another whistle-blower questioned Wednesday why more military assets were not deployed sooner during the Benghazi terror attack. Mark Thompson, a former Marine and official with the State Department’s Counterterrorism Bureau, said he was rebuffed by the White House when he asked for a specialized team — known as a FEST team — to be deployed. This is a unit made of special operations personnel, diplomatic security, intelligence and other officers.

Suggesting that some were hesitant to deploy because they were unsure what was happening, “One definition of a crisis is you do not know what’s going to happen in two hours,” he said.

Further, Hicks explained how a separate team of special forces personnel were not given the authorization to fly from Tripoli to Benghazi. “They were furious,” he said.

Rep. Darrell Issa, chairman of the oversight committee holding the hearing, defended the witnesses, calling them “actual experts on what really happened before, during and after the Benghazi attacks,” who “deserve to be heard.”

“I am a career public servant,” Hicks said. “Until the aftermath of Benghazi, I loved every day of my job.”

Nordstrom choked up as he began to testify Wednesday.

Rep. Elijah Cummings, D-Md., top Democrat on the oversight committee, said Wednesday that Republicans are using the witnesses’ statements for “political purposes.” He said he’s glad the whistle-blowers are testifying and would ensure they are protected, but pre-emptively challenged some of their claims — including the claim that U.S. military could have responded sooner to the site of the attack.

The Obama administration has adamantly denied several of the latest charges, including a claim that then-Secretary of State Hillary Clinton and a key aide tried to cut the department’s own counterterrorism bureau out of the chain of reporting and decision-making on Sept. 11. The administration also denied that the whistle-blowers in question were intimidated — while behind the scenes questioning the credibility of the witnesses.

A “fact sheet” released by the department ahead of the hearing reiterated its denials. The statement said the department has “demonstrated an unprecedented degree of cooperation with the Congress” on Libya, and rejected claims that the military was in a position to help that night but was told to stand down. Citing its internal review, the statement noted the review “found no evidence of any undue delays in decision making or denial of support from Washington or from the military combatant commanders.”