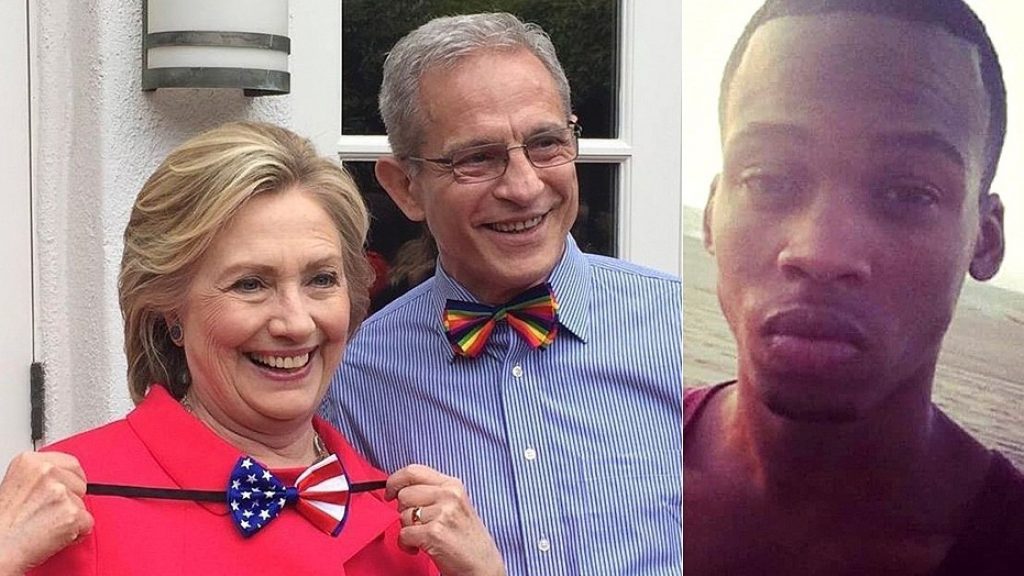 Democratic donor Ed Buck is seen with Hillary Clinton in 2016. Gemmel Moore, who died inside Buck’s home, is seen at right. (Facebook)

At least a half dozen Democrats have quietly returned or redirected donations from a high-powered donor being investigated in the fatal drug overdose of a male escort—while bigger-name national party figures who also took his money remain uncharacteristically silent on the case.

The mayor of Los Angeles, three members of Congress, two people running for Congress and the Los Angeles district attorney have all returned or given away their donations from Ed Buck, 63, a West Hollywood resident who has given more than $500,000 to Democratic candidates and groups over the years. Buck is now the subject of an investigation into the death of Gemmel Moore, a 26-year-old escort who was found dead of a methamphetamine overdose at Buck’s home on July 27.

Buck’s own congressman, Democratic Rep. Adam Schiff, who received $2,700 in 2016, told Fox News through a spokesperson that he donated the full amount to the Trevor Project—a nonprofit that provides crisis intervention and suicide prevention services to LGBTQ youth nationwide.

Schiff’s press office would not confirm precisely when he made the donation to the Trevor Project. “The death of Gemmel Moore is deeply tragic,” Emilie Simons, spokesperson for Schiff, told Fox News in a recent statement.

But Hillary Clinton and former president Barack Obama, both of whom also received donations from Buck, have not responded to inquiries about the case.

Congressman Adam Schiff of California donated the $2,700 he received from Ed Buck to the Trevor Project. (Reuters)

The investigation into Moore’s death, originally ruled an accidental overdose, was reopened in August by the Los Angeles County Sheriff’s Office. Boosted by information found at the scene and provided by Moore’s family, the case remains open as officials try to find and interview others who may have been involved with Buck in similar situations, or have some knowledge of the case.

Among the allegations being investigated are reports that Buck frequently employed escorts to come to his home and do drugs. Authorities have examined a diary found in Moore’s possessions, which appears to describe Buck’s apparent insistence and instruction that Moore do drugs.

Buck’s attorney, Seymour Amster, maintains that his client bears no responsibility for Moore’s death and told Fox News that Buck was “legitimately trying to help” the young man.

“The cause of [Moore’s] death was not the result of anything Mr. Buck did,” Amster told Fox News, adding that his client considered Moore a friend.

The reopened investigation was enough for Kevin de Leon, a California state senator who is hoping to unseat Sen. Dianne Feinstein, to give $19,700 in contributions from Buck—made over the course of several years—to a local nonprofit.

“Senator de Leon has absolutely zero tolerance for hate, discrimination or violence of any kind. He has donated Mr. Buck’s contribution to a provider of crisis prevention services for survivors of domestic violence and sexual assault,” Jonathan Underland, a spokesperson for the state senator, said after Fox News published an article on the case on Feb. 13.

Other officials had similarly distanced themselves from Buck.

“What I am hearing and reading about [Buck’s] conduct with Gemmel is deeply disturbing.”

An adviser for Los Angeles Mayor Eric Garcetti told Fox News on Tuesday his office last year returned $1,400 from Buck that was contributed in November of 2016. The money was returned soon after the case was reopened, the adviser said.

Los Angeles District Attorney Jackie Lacey, who received $100 from Buck in 2012, returned that donation in the last month.

“DA Lacey does not know Mr. Buck and she has returned the contribution,” Lacey’s campaign consultant told Fox News.

A campaign spokesperson for Rep. Kyrsten Sinema of Arizona told Fox News this week that the congresswoman donated the $5,400 she’d received from Buck to a Phoenix organization for homeless youth.

“It’s horribly sad that this young man lost his life. We wish his family peace. While the investigation continues, we’ve donated the money to the Tumbleweed program at UMOM New Day Center,” the campaign said in a statement to Fox News.

And the first elected official to disavow Buck’s contribution, California Rep. Karen Bass, gave her $250 donation to Moore’s family back in August.

“I’m stunned by the news of Gemmel’s death and the tragic and sad circumstances surrounding it,” Bass said in a statement. “What I am hearing and reading about [Buck’s] conduct with Gemmel is deeply disturbing.

If there are other victims, they should come forward immediately,” Bass said in a statement. “It is my hope that law enforcement is prepared to investigate and prosecute to the fullest extent of the law.”

Bryan Caforio, who is running to represent the 25th Congressional district seat currently occupied by Republican Rep. Steve Knight, last year returned a $2,700 contribution that he received from Buck in October of 2016.

Family and friends of Moore, above, have demanded that Democrats return funds they received from Buck. (Facebook)

Moore’s family and friends have launched a campaign to bring awareness to the case, and have asked all Democrats who received contributions from Buck to either return the funds or donate them to Moore’s family or a nonprofit.

A petition circulating calling for the action has picked up 4,584 signatures. “As Democrats we are often the first to call on Republicans to return money at the slightest hint of impropriety — there should not be a double standard when a Democratic donor is involved in the wrongdoing,” the petition states.

But not every politician has repudiated Buck. West Hollywood Mayor John Heilman, who received a $500 donation in March, told Fox News he has “no intention” of returning the donation, adding: “I support a full and fair investigation by the Sheriff’s department with respect to the tragic death of Gemmel Moore.”

When Fox News asked Amster about Buck’s donations being returned, and whether his client plans to continue giving money to the Democratic Party, he said: “It’s their decision and what he’s doing politically is his private business.”