Notice: Function add_theme_support( 'html5' ) was called incorrectly. You need to pass an array of types. Please see Debugging in WordPress for more information. (This message was added in version 3.6.1.) in /home/kj8d9sfz7jzn/public_html/federalistpress.com/wp-includes/functions.php on line 5831
 Billy Graham Dead at 99

The Rev. Billy Graham , the Christian evangelist whose worldwide crusades and role as adviser to decades of U.S. presidents made him one of the best known religious figures of his time, died Wednesday at age 99 at his home in Montreat, N.C, Todd Shearer of DeMoss Associates told Fox News.

Graham, who had been in ill health for a number of years, was regularly listed in polls as one of the “Ten Most Admired Men in the World.”

His Christian crusades took him from the frenzy of Manhattan to isolated African villages and according to the Billy Graham Evangelistic Association website, he preached to more people in live audiences than anyone else in history. 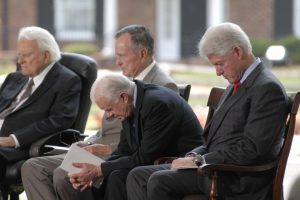 The BGEA put his audience at nearly 215 million people in more than 185 countries and territories, with “hundreds of millions more” viewing him on television, video, film and webcasts.

“My one purpose in life,” he said, “is to help people find a personal relationship with God, which, I believe, comes through knowing Christ.”

Graham was last hospitalized November 30 (2011) at Mission Hospital in Asheville, N.C. for what was described as “evaluation and treatment of his lungs.” He previously was hospitalized in May 2011 with pneumonia.

William Franklin Graham Jr. was born November 7, 1918 and raised on a dairy farm in Charlotte, N.C.

At 15, he made his personal commitment to Christ at a revival meeting in Charlotte. After attending Bob Jones College and the Florida Bible Institute, Graham was ordained a Southern Baptist clergyman in 1939.

In 1943, he graduated from Wheaton College, where he met fellow student Ruth McCue Bell, daughter of a medical missionary, who had spent the first 17 years of her life in China.

They married in August 1943 and had five children, 19 grandchildren and numerous great-grandchildren.

Ruth Graham died in June 2007 after 64 years of marriage.

Graham vaulted to national prominence with his 1948 Los Angeles crusade, scheduled for three weeks and extended to eight.

Subsequent crusades in various cities around the globe also lasted far longer than scheduled – in New York, he ran nightly for four months at Madison Square Garden in 1957.

In 1950, Graham founded the Billy Graham Evangelistic Association, based in Minneapolis, Minn. until it relocated to Charlotte in 2003. 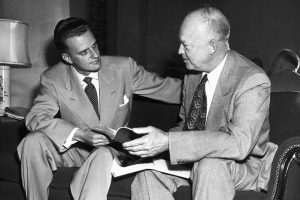 Through the BGEA he conducted his weekly “Hour of Decision” radio program and published “Decision” Magazine as well as producing television programs for Christian networks.

In addition, Graham wrote 29 books, including his autobiography “Just As I Am.” His last book, “Nearing Home: Life, Faith, and Finishing Well” was published last October (2011).

In the 1960s, he ardently opposed segregation, refusing to speak to segregated audiences.

“The ground at the foot of the cross is level,” he once said, “and it touches my heart when I see whites standing shoulder to shoulder with blacks at the cross.”

Graham also was noted for consulting and praying with every U.S. president from Dwight Eisenhower to Barack Obama, who in April (2010) visited Graham at his mountaintop cabin in North Carolina.

The White House later said Obama was “extraordinarily gratified” that Graham took the time to meet with him.

Graham presided over the graveside services for President Lyndon Johnson in 1973 and spoke at the funeral of President Richard Nixon in 1994.

On September 14, 2001 he led a national prayer service at Washington National Cathedral after the 9/11 attacks.

He and his wife were both awarded the Congressional Gold Medal in 1966.

But Graham found himself the target of criticism in 2002 and again in 2009 following the release of tapes of 1973 conversations he had with Richard Nixon that were critical of Jews.

He remained active well into his 70s but in recent years had been slowed by Parkinson’s Disease and other medical problems.

His last crusade was in 2004. His elder son, Franklin, has long been expected to succeed his father as head of his ministry.