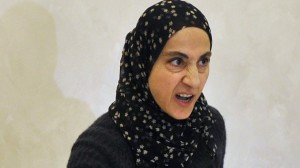 The mother of the Boston Marathon bombing suspects is a “person of interest” to federal authorities seeking to learn who radicalized one or both of her sons, according to lawmakers, and a separate report said she was on a federal terrorism database some 18 months before the attack.

Zubeidat Tsarnaeva, who had reportedly become more militant in her Muslim faith around the same time as her son, Tamerlan Tsarnaev, was added to the classified intelligence database known by the acronym TIDE at the CIA’s request. Two key lawmakers said authorities now want to know if she helped put her son, who died a week ago following a shootout with police in Massachusetts, on the road to radicalism.

“She is a person of interest that we’re looking at to see if she helped radicalize her son, or had contacts with other people or other terrorist groups,” Rep. Dutch Ruppersberger, D-Md., the top Democrat on the House Intelligence Committee, told reporters.

Rep. Michael McCaul, R-Texas, who chairs the House Homeland Security Committee, also pointed to Zubeidat as someone who may have led Tamerlan down the path toward Islamic extremism.

“The mother in my judgment has a role in his radicalization process in terms of her influence over him (and) fundamental views of Islam,” McCaul said.

Tsarnaeva was put on the database after Russia told the CIA the mother and son were religious militants preparing to travel to Russia, the AP reported. It has already been widely reported that Tamerlan Tsarnaev, the 26-year-old suspect who died after a shootout with police in Massachusetts a week ago, was on the list.

The Terrorist Identities Datamart Environment database contains between 500,000 and 1 million names of people on the radar of various national security agencies, but a person’s presence on the list does not automatically mean he or she is suspected of terrorist activity and does not automatically subject them to surveillance, security screening or travel restrictions.

Zubeidat Tsarnaeva said she was not planning to travel to the U.S. in the wake of one son’s death and the other’s arrest, though her ex-husband was planning to. But she told Fox News Friday that her ex-husband, Anzor Tsarnaev, was being taken Friday to a hospital in Moscow to treat what she described as “nerves, head, stomach and elevated blood pressure.”

Anzor Tsarnaev had planned to fly to the U.S. from the semi-autonomous southern Russian republic of Dagestan as early as Thursday. His sons, 26-year-old Tamerlan and 19-year-old Dzhokhar Tsarnaev, are responsible for detonating two bombs at the Boston Marathon last week, killing three and injuring more than 180 people, according to federal law enforcement officials.

In a press conference on Thursday, Anzor Tsarnaev said he was coming to the U.S. to bury his eldest son and “find out the truth” — while his ex-wife, who sat beside him, questioned whether the attack even took place.

Tamerlan Tsarnaev, believed to be the mastermind behind the attacks, died in a fierce gun battle with police four days after the deadly attacks. His body has not yet been claimed.

Dzhokhar Tsarnaev, who was wounded in the gun fight with authorities, has been transported from the Beth Israel Deaconess Medical Center to the Federal Medical Center at Fort Devens in Ft. Devens, Mass., U.S. Marshals Service spokesman Drew Wade said. He faces a charge of use of a weapon of mass destruction that could carry the death penalty.

Speaking to reporters from the mountainous southern Russian region of Dagestan, Anzor Tsarnaev said Thursday that he still isn’t convinced his sons set the bombs on April 15.

“I am going to the United States,” Tsarnaev said, punctuating his words by banging on the table. “I want to say that I am going there to see my son, to bury the older one. I don’t have any bad intentions. I don’t plan to blow up anything.”

The suspects’ mother, who has an outstanding warrant for shoplifting, is apparently not planning to make the trip. She expressed sympathy for the victims, yet questioned whether the bombing occurred, suggesting red paint was used to simulate blood on Boston’s Boylston Street.

Anzor Tsarnaev — who has previously said he believes his sons were set up, despite Dzhokhar’s alleged confession from his hospital bed — said he planned to leave as early as Thursday.

But Zubeidat Tsarnaeva told Fox News that it will take her ex-husband at least two days to decide whether he is able to make the trip. She said the two were en route to a hospital in Moscow and will make further decisions about travel from there.

Zubeidat Tsarnaeva remains wanted on felony shoplifting and property damage charges in Massachusetts, according to court officials, and is concerned she could be arrested. Tsarnaeva said she had been assured by lawyers, however, that she would not be.

She said she now regrets moving her family to the United States.

“I thought America was going to, like, protect us, our kids, it’s going to be safe,” Zubeidat Tsarnaeva told reporters. “But it happened, opposite. My kids just — America took my kids away from me.”

Anzor Tsarnaev told reporters that Tamerlan stayed with him in Makhachkala, Dagestan’s capital, during a trip his eldest son made in January 2012. Tsarnaev said they visited relatives in Chechnya and worked on an apartment in Makhachkala, but stressed that they were always together, including during trips to mosques. Tamerlan had made the trip primarily to obtain a Russian passport, he said.

Anzor Tsarnaev, who said his relatives were receiving threats in Dagestan, said Tamerlan never showed particular interest in the plight of the Chechen people or its two recent wars.

On Wednesday, Anzor Tsarnaev confirmed to Fox News that FBI and Russian authorities had visited him, adding that FBI officials were polite while asking him questions.

The Tsarnaev family emigrated to the U.S. a decade ago, but both parents returned to Russia last year. Dzhokhar Tsarnaev became a U.S. citizen last year, but Tamerlan had not yet earned citizenship.

Also Thursday, Russian President Vladimir Putin said the bombings should spur stronger security cooperation between Moscow and Washington, adding that they also show that the West was wrong in supporting militants in Chechnya.

“This tragedy should push us closer in fending off common threats, including terrorism, which is one of the biggest and most dangerous of them,” Putin said during his annual call-in show on state television.

Putin warned against trying to find the roots for the Boston tragedy in the suffering endured by the Chechen people, particularly in mass deportations of Chechens to Siberia and Central Asia on Soviet dictator Josef Stalin’s orders.

“The cause isn’t in their ethnicity or religion, it’s in their extremist sentiments,” Putin said.

Fox News’ Amy Kellogg and The Associated Press contributed to this report.