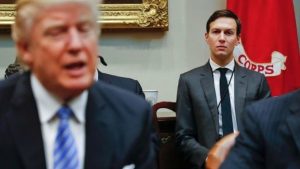 Jared Kushner, President Donald Trump’s son-in-law and one of the senior advisers in the Trump administration, was seeking a private communications channel with the Kremlin, according to a new report in The Washington Post.

Kushner and Russian ambassador Sergei Kislyak spoke of the possibility of coordinating a secret and secure communications channel between the Trump transition team and the Kremlin, the paper said.

Kushner suggested the use of Russian diplomatic facilities as a way to shield their pre-inauguration discussions from monitoring, U.S. officials briefed on intelligence reports told The Post.