A series of explosions rang out early Tuesday morning as police stormed the Sydney cafe where a jihadist and murder suspect has been holding hostages for 16 hours.

The explosions, which local media said were caused by flash grenades just before 2:30 a.m. local time, came as several more hostages fled Lindt Chocolat Cafe, where a man identified as Man Haron Monis, an Iranian also known for sending hate mail to the families of fallen soldiers, was holed up with an unknown number of captives. The drama, which began early Monday, appeared to be coming to a dramatic resolution, as frenzied activity enveloped the scene that Australians had been watching on television for hours.

“Police and paramedics have stormed the building,” the Sydney Morning Herald reported. “Dozens of continuous bangs and possibly gun shots have lit up the sky.”

Several people were taken from the building on stretchers as an alarm rang and police in riot gear moved in and out of the shop, in the heart of Australia’s largest city’s business district.

Earlier, with police and news crews surrounding the shop as frightened hostages looked out through the front window, police identified Monis as the gunman holding captives inside. His identity was known early on to police and media alike, but was only released for the record by police sources as night fell on Sydney with the nation transfixed on the televised scene.

Earlier, several people were seen with their arms in the air and hands pressed against the glass, and two people were seen holding up a black flag associated with Islamic fanaticism. Australian broadcaster Network Ten reported that the gunman, seen wielding a shotgun and a machete, has forced hostages to call him “The Brother” and demanded to speak directly with Australian Prime Minister Tony Abbott.

Sky News Australia reported that one of the hostages had contacted a radio broadcaster twice during the siege. Ray Hadley said he had spoken to a “remarkably calm” male hostage and that the hostage taker had demanded the hostage speak live on the radio, a demand Hadley refused. 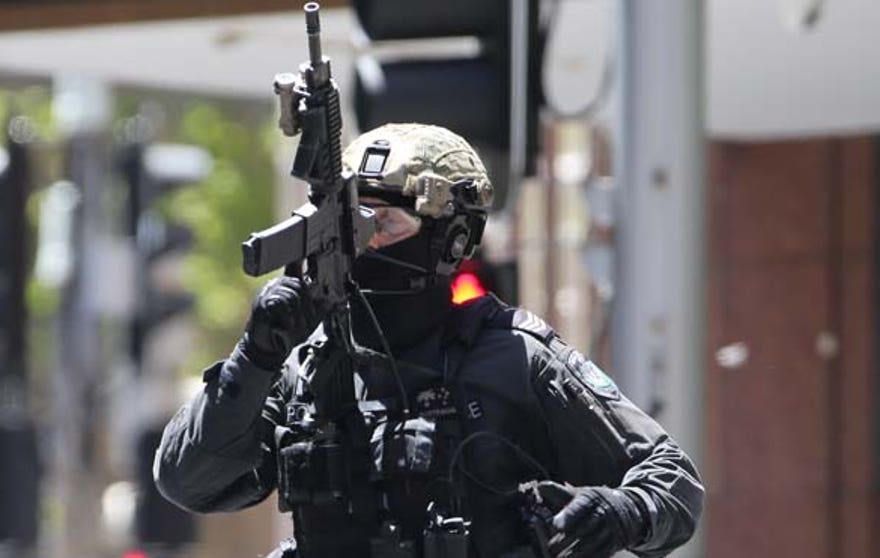 Dec. 15, 2014: A police runs along a street close to a cafe under siege at Martin Place in the central business district of Sydney, Australia. (AP)

The drama began during the Monday morning rush hour and carried into night time in Australia’s largest city. Five hostages escaped some six hours into the ordeal, running out a side door and into the arms of police, who have the shop surrounded. The shop is in Sydney’s central business district in Martin Place, a plaza in the heart of the city’s financial and shopping district that is packed with holiday shoppers this time of year. Area shops were closed and people were ordered to stay out of the area.

A journalist on the scene tweeted that the terror suspect appeared to fly into a rage after the hostages escaped.

“The gunman could be seen from here getting extremely agitated, shouting at remaining hostages.”- Chris Reason, journalist

“The gunman could be seen from here getting extremely agitated, shouting at remaining hostages,” tweeted journalist Chris Reason.

Reason described Monis as unshaven, wearing a white shirt and a black cap, and holding what appeared to be a pump-action shotgun. He could be seen pacing back and forth past the cafe’s four windows. Sky News described Monis as bearded, middle-aged and wearing a black and white headband. Sky cited reports that he is known to police and media outlets.

“Just two hours ago when we saw that rush of escapees, we could see from up here in this vantage point the gunman got extremely agitated as he realized those five had got out. He started screaming orders at the people, the hostages who remain behind,” Reason reported. 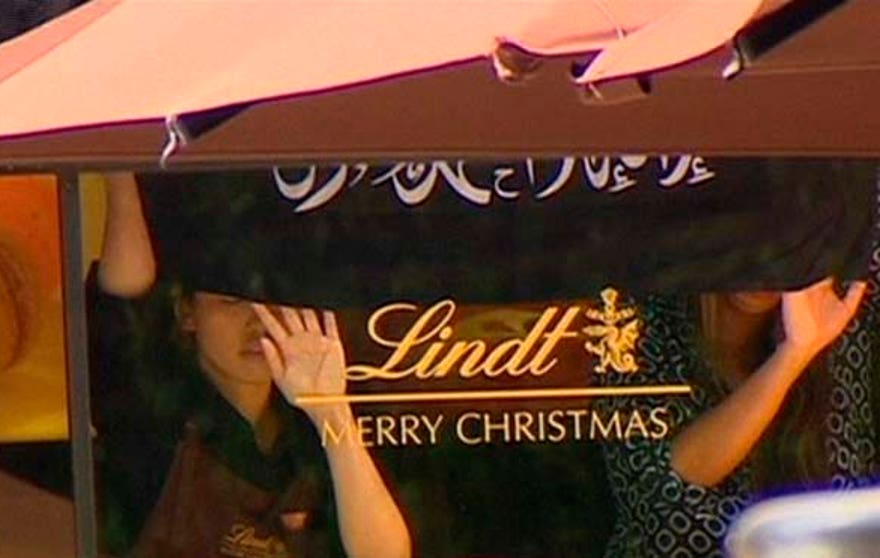 Dec. 15, 2014: This image taken from video show people holding up what appeared to be a black flag with white Arabic writing on it, inside a cafe in Sydney, Australia, on Monday. (AP/Channel 7)

Monis, who reportedly emigrated to Australia in 1996, is known in Australia for his public campaign of writing letters to the families of fallen soldiers calling them “murderers” and urging the recipients to lobby the government to withdraw from Afghanistan. Haron was charged in 2009 with using the postal service to harass in a case he fought all the way to Australia’s highest court, which dismissed his appeal.

Last year, he was charged in connection with the murder of his ex-wife in a case that is pending as Monis is free on bail. He was charged earlier this year with sexual assault of a woman who went to his office in New South Wales for “spiritual healing.”

As night descended on Sydney, the lights inside the shop went off, but it was unclear if that was by the suspected jihadist’s choice or if the police made the cafe go dark as a negotiating tactic. Earlier, the gunman appeared to be rotating frightened hostages in front of the window, holding up the black Islamist flag “Shahada” flag, an emblem of Jabhat al-Nusra, the Al Qaeda-linked terror group fighting – sometimes with, sometimes against – Islamic State in Syria.

The gunman was reportedly relaying threats and demands through two hostages, and claimed to have planted two bombs inside the cafe and two others elsewhere in Sydney’s central business district. New South Wales Police Commissioner Andrew Scipione told reporters Monday evening that authorities were concentrating their efforts solely on the cafe and were not concerned with any other location

Late Monday, Abbott released a pre-recorded statement calling the attack “very disturbing” and “profoundly shocking.” His office has not responded to the gunman’s demands.

Three men were seen running from a fire exit of the cafe approximately six hours after the hostage situation began at 9:45 a.m. local time. Moments later, two women believed to be employees, followed suit. It was not immediately clear how the hostages escaped.

New South Wales Deputy Police Commissioner for Specialist Operations Catherine Burn said negotiators had made contact with the unidentified gunman and believe he is the lone suspect inside the cafe. Burn also said that fewer than 30 people were held inside the cafe, though she did not give an exact number. Local reports put the number at between 10 and 15, and witnesses said they do not believe any children are inside.

“We do not have any information that suggests that anybody is harmed at this stage,” she said.

The U.S. Consulate, located just south of the cafe, was also evacuated and a warning issued urging Americans in Sydney to “maintain a high level of vigilance and take appropriate steps to enhance your personal security.” A White House official told Fox News that President Obama had been briefed on the situation.

Lindt Australia posted a message on its Facebook page thanking the public for its support.

“We are deeply concerned over this serious incident and our thoughts and prayers are with the staff and customers involved and all their friends and families,” the company wrote.

The government raised Australia’s terror warning level in September in response to the domestic threat posed by supporters of the Islamic State group. Counterterror law enforcement teams later conducted dozens of raids and made several arrests in Australia’s three largest cities — Melbourne, Sydney and Brisbane. One man arrested during a series of raids in Sydney was charged with conspiring with an Islamic State leader in Syria to behead a random person in downtown Sydney.

The Islamic State group, which now holds a third of Syria and Iraq, has threatened Australia in the past. In September, Islamic State group spokesman Abu Mohammed al-Adnani issued an audio message urging so-called “lone wolf” attacks abroad, specifically mentioning Australia. Al-Adnani told Muslims to kill all “disbelievers,” whether they be civilians or soldiers.