Notice: Function add_theme_support( 'html5' ) was called incorrectly. You need to pass an array of types. Please see Debugging in WordPress for more information. (This message was added in version 3.6.1.) in /home/kj8d9sfz7jzn/public_html/federalistpress.com/wp-includes/functions.php on line 5831
 California Dems Aim to Curb Oil Bonanza With Anti-Fracking Bills 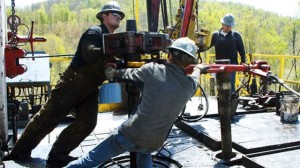 California is on the verge of a new gold rush. Expanded hydraulic fracturing — or “fracking” — at the Monterey Shale formation is sparking estimates that 15 billion barrels of oil could be accessed, along with millions of jobs and huge contributions to the domestic energy supply.Even the state’s green-friendly Democratic governor, Jerry Brown, says “the potential is extraordinary.”But standing in the way is a flurry of anti-fracking bills. At last count, 10 were on the table, all introduced by Democrats seeking tighter controls over the controversial technology.Some of the measures take aim at how crude is extracted from rock layers beyond the reach of conventional drilling.Others call for full disclosure of what chemicals are used in the high-pressure process, how they’re removed, and where they’re stored.California State Sen. Fran Pavley, a longtime environmental activist, is pushing for a fracking moratorium until more studies are done on the potential risks, particularly to the groundwater supply.

“With hydraulic fracturing, hundreds of gallons of water, laced with chemicals, sand … can go horizontally underground. … We don’t know enough,” she said.

Fracking has been around in California for decades. It’s a standard step in oil drilling, and while health problems have been reported in states like Colorado and Pennsylvania, the technology has a clean safety record in the Golden State. But critics argue it’s virtually impossible to know exactly where, or how often, fracking operations are occurring.

“Companies aren’t required to report fracking to anyone — not the state or the federal government,” said Patrick Sullivan, with the Center for Biological Diversity. “Some have made their fracking public, but they certainly don’t have to.”

Even so, supporters say bills seeking more studies and rules are, at this point, premature — and could jeopardize a potential bonanza.

“Why would you want to curtail energy production, with a technology that has proved to be safe, and (deny) the folks in the regions of the state where those benefits are going to accrue? That just doesn’t make any sense,” argued Tupper Hull, with the Western States Petroleum Association.

At public workshops, state regulators who oversee drilling in California are outlining their own preliminary rules. They argue once they’re formally approved, these rules will make anti-fracking laws unnecessary.

But some legislators aren’t convinced those regulations will be enough, as energy companies aggressively eye the vast Monterey Shale, and the promise of the biggest boom ever in this oil-rich state.