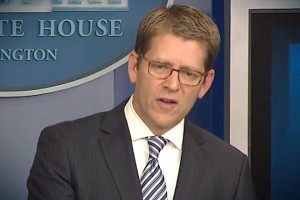 Most people are happy to declare “Thank God it’s Friday.”

On Friday May 10, White House Press Secretary Jay Carney was not one of them. Carney got a “case of the Mondays”

a few days early as the Obama administration’s lies about Benghazi and potentially criminal acts at the IRS all caught up with them at once.

were “dramatically edited by the administration” a total of 12 different times. Those changes included the removal of all references to Al Qaeda initially approved by the CIA.

That public relations disaster was followed by another later in the day. The IRS admitted that conservatives had been right all along and that right-wing groups had indeed been targeted by the IRS. In true Nixonian

language, the IRS admitted “mistakes were made,”

but denied they were political, convincing absolutely no one.

in the lefty TV show “West Wing,” are supposed to be days when the administration hides news. On May 10,  the trash bin was overflowing and even the press noticed. Carney couldn’t dump garbage fast enough. He fielded at least 38 questions on Benghazi and another eight on the possible crimes at the IRS.

Throughout, he dodged, weaved and blamed – especially blamed. He blamed former President George W. Bush, the CIA, the IRS, Congress, Mitt Romney and, of course, Republicans. “Congress” got blamed 28 times and Republicans got mentioned 20 times by Carney as he tried to spin his way out of trouble.

” earlier for 14 news organizations. That meeting, held following these types of PR disasters, had to be spinning like a carnival ride. And the spinning had just gotten started.

The IRS questions were easier since even Carney admitted he wasn’t in the know. He stressed “two things” to pass the buck – that the IRS was an “independent enforcement agency” and “the individual who was running the IRS at the time was actually an appointee from the previous administration.” In other words, blame Bush. I think he learned that one from his boss.

When it came to Benghazi, Carney claimed the White House made a “non-substantive factual correction” to the talking points. He continued: “I must say that all of this information was provided months ago to members of Congress,” adding sarcastically, “which they have leaked now to reporters.” This, after the White House just had a background meeting with 14 different news organizations so they could leak, er, give background information

At several points, Carney embraced his inner Candy Crowley and claimed, inaccurately, that Obama had called the attack “an act of terror” during his Rose Garden speech. (Kudos

to Tim Carney for that catch.) However, that’s completely untrue. Even CBS News admitted

in 2012 that the transcript “shows that the president did refer to ‘acts of terror’ – but not specifically in reference to the Libya attack. Instead, he made a broader statement about American defiance.” The Team Obama shorthand has created a fictional narrative that is largely accepted by the media.

During the briefing, question after question pounded Carney on his previous comments that only “stylistic” changes had been made to the Benghazi talking points, when that obviously was not true.

The questioning grew heated and it appeared to show on Carney, as first his ears and then his face reddened to the point where people on Twitter were mocking it. Twitchy

captured some of the more fun comments including one saying he was trying to “defend the indefensible.” That was an understatement.

where she made the bogus comments about the “heinous and offensive” video about Islam.

It took 37 minutes into the press conference for one of the reporters to ask a question that didn’t involve one of the day’s two big scandals. Carney seemed to breathe a sigh of relief when it happened.

But it wasn’t over. One of the later questions was telling. “Don’t this series of e-mails now I suggest that your discussion of the video was speculative. You were cherry picking,” asked one reporter. Others pointed out a key flaw in Carney’s defense, calling him out for saying the talking points were what we were sure we knew, but reminding him that the initial talking points said the CIA wrote “we do know that Islamic extremists with ties to al-Qa’ida participated in the attack.” Carney’s response was to direct that inquiry to the “intelligence community.”

If the questioning was a true sign of media interest, Carney can look for many more red-faced press briefings. Perhaps he needs more make-up next time. He should try cover-up. It’s perfect.

. He writes frequently about media for Fox News Opinion. He can also be contacted on Facebook and Twitter as dangainor.

. He writes frequently about media for Fox News Opinion. He can also be contacted on Facebook and Twitter