Notice: Function add_theme_support( 'html5' ) was called incorrectly. You need to pass an array of types. Please see Debugging in WordPress for more information. (This message was added in version 3.6.1.) in /home/kj8d9sfz7jzn/public_html/federalistpress.com/wp-includes/functions.php on line 5831
 China Mobilizing Troops and Jets to N. Korean Border 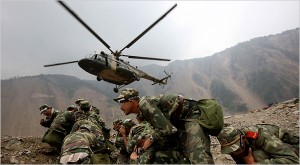 China has placed military forces on heightened alert in the northeastern part of the country as tensions mount on the Korean peninsula following recent threats by Pyongyang to attack, U.S. officials said.

Reports from the region reveal the Chinese People’s Liberation Army (PLA) recently increased its military posture in response to the heightened tensions, specifically North Korea’s declaration of a “state of war” and threats to conduct missile attacks against the United States and South Korea.

According to the officials, the PLA has stepped up military mobilization in the border region with North Korea since mid-March, including troop movements and warplane activity.

China’s navy also conducted live-firing naval drills by warships in the Yellow Sea that were set to end Monday near the Korean peninsula, in apparent support of North Korea, which was angered by ongoing U.S.-South Korean military drills that are set to continue throughout April.

North Korea, meanwhile, is mobilizing missile forces, including road-mobile short- and medium-range missiles, according to officials familiar with satellite imagery of missile bases.