Notice: Function add_theme_support( 'html5' ) was called incorrectly. You need to pass an array of types. Please see Debugging in WordPress for more information. (This message was added in version 3.6.1.) in /home/kj8d9sfz7jzn/public_html/federalistpress.com/wp-includes/functions.php on line 5831
 Clinton, Sanders Battle to Appear Biggest Leftist 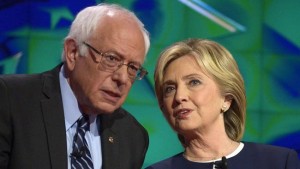 Hillary Clinton and Bernie Sanders clashed sharply Thursday over who is more progressive, at a debate that saw the former secretary of state ratcheting up her criticism of the Vermont senator on several fronts – even accusing him of engineering an “artful smear” with suggestions she could be “bought” by donors.

The debate, the first since the Iowa caucuses and last before next week’s critical New Hampshire primary, was by far the most confrontational of the Democratic primary race.

Clinton, coming off a narrow Iowa win and trying to shrink Sanders’ huge lead in Granite State polls, stayed on offense for most of the night. She slammed Sanders’ campaign promises as too costly, while standing firm in claiming she’s a true “progressive” despite Sanders’ comments to the contrary.

Sanders, meanwhile, dug in as he questioned whether Clinton really “walks the walk” of the progressive cause – and described her as the candidate of the “establishment.”

“Secretary Clinton does represent the establishment. I represent, I hope, ordinary Americans,” he said, stressing that he, unlike Clinton, doesn’t enjoy super PAC backing and is funded in large part by small-dollar donations. 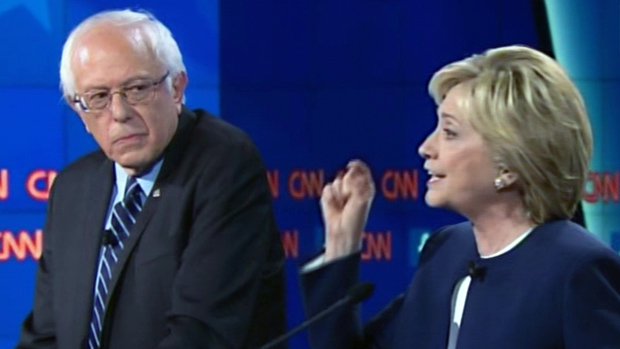 The verbal jabs flew quickly, and Clinton left few allegations unchallenged, visibly fed up with a campaign trail narrative that has painted her as the candidate of Wall Street. She rebutted Sanders’ “establishment” charge by questioning whether someone running to be the first female president can carry that label.

The most heated moment at the MSNBC-hosted debate in Durham, N.H., came when Clinton told Sanders she rejects the suggestion that anyone who takes donations or speaking fees from interest groups can be bought.

“Enough is enough,” Clinton said, telling Sanders the “attacks by insinuation” are not “worthy” of him. Clinton said if Sanders has something to allege, “say it directly,” but: “You will not find that I ever changed a view or a vote because of any donation that I ever received.”

She closed: “I think it’s time to end the very artful smear that you and your campaign have been carrying out in recent weeks.”

That line earned a groan from Sanders and some boos from the audience.

Sanders went on to link Wall Street deregulation with billions spent on lobbying and campaign contributions.

“Some people think, yeah, that had some influence,” he said.

Clinton, meanwhile, described herself as a “progressive who gets things done,” and ripped Sanders for suggesting Clinton cannot be a “moderate” and a “progressive” at the same time. She teased Sanders as being the “self-proclaimed gatekeeper for progressivism” and said she doesn’t know anyone who fits his definition.

The fireworks underscored the tight state of the race going into New Hampshire’s contest next Tuesday. Clinton arrived on the debate stage clearly ready to rebut Sanders’ proposals and accusations – notably his oft-repeated criticism that she, as senator, erred by voting to authorize the use of force in Iraq.

Yet as Clinton stressed her secretary of state experience and Sanders said that factor is “not arguable,” the Vermont senator noted experience is not the only point.

As she has at prior debates, Clinton also challenged the senator’s proposals for free college and universal health care. “The numbers just don’t add up,” Clinton said.

She questioned how the country could, for instance, pay for free tuition at public colleges, as Sanders wants, and accused him of wanting to effectively scrap ObamaCare – a charge he denied.

“I do believe we should have health care for all,” he said.

The former secretary of state met the Vermont senator on stage in Durham, N.H., after eking out a narrow victory in Monday’s caucuses. While her campaign celebrated the win, Sanders’ strong showing in the state nevertheless has helped boost his fundraising – and he heads into New Hampshire with a steady double-digit lead in the polls.

There remains an ongoing dispute, however, over the Iowa results. The Des Moines Register editorial board earlier Thursday called for an audit of the Democratic caucus results, citing problems and confusion at polling sites.

Asked at Thursday’s debate about the editorial, Sanders said, “I agree with the Des Moines Register.”

He said after speaking with precinct captains, the campaign believes they may have “at least two more delegates.”

Yet Sanders, who has complained how some local delegates were allocated based on coin tosses, also said they should not “blow this out of proportion. “

“This is not the biggest deal in the world,” Sanders said.

Asked if she’d participate in an audit, Clinton said, “Whatever they decide to do, that’s fine.”

Clinton, separately, said she’s “100 percent confident” nothing will come of the FBI probe into her personal email use as secretary of state.

The Democratic debate on Thursday was the first to feature Clinton and Sanders one-on-one, with former Maryland Gov. Martin O’Malley now out of the race following his distant third showing in Iowa.

The debate was one of four added to the calendar earlier this week, after the Democratic National Committee and the two campaigns agreed to the terms.  The party had come under criticism for its sparse schedule, and was accused of trying to shield Clinton from debates.