Notice: Function add_theme_support( 'html5' ) was called incorrectly. You need to pass an array of types. Please see Debugging in WordPress for more information. (This message was added in version 3.6.1.) in /home/kj8d9sfz7jzn/public_html/federalistpress.com/wp-includes/functions.php on line 5831
 Clinton’s Maid: Hillary had Me Print Out Classified Materials 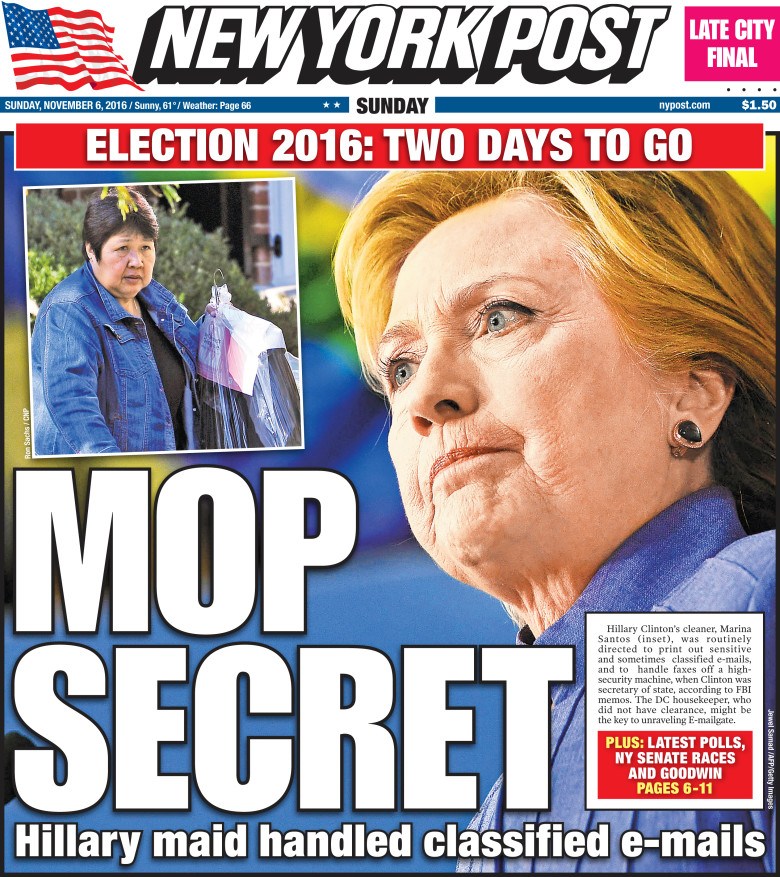 As secretary of state, Hillary Clinton routinely asked her maid to print out sensitive government e-mails and documents — including ones containing classified information — from her house in Washington, DC, e-mails and FBI memos show. But the housekeeper lacked the security clearance to handle such material.

In fact, Marina Santos was called on so frequently to receive e-mails that she may hold the secrets to E-mailgate — if only the FBI and Congress would subpoena her and the equipment she used.

Clinton entrusted far more than the care of her DC residence, known as Whitehaven, to Santos. She expected the Filipino immigrant to handle state secrets, further opening the Democratic presidential nominee to criticism that she played fast and loose with national security.

Clinton would first receive highly sensitive e-mails from top aides at the State Department and then request that they, in turn, forward the messages and any attached documents to Santos to print out for her at the home.

Among other things, Clinton requested Santos print out drafts of her speeches, confidential memos and “call sheets” — background information and talking points prepared for the secretary of state in advance of a phone call with a foreign head of state.

“Pls ask Marina to print for me in am,” Clinton e-mailed top aide Huma Abedin regarding a redacted 2011 message marked sensitive but unclassified.

In a classified 2012 e-mail dealing with the new president of Malawi, another Clinton aide, Monica Hanley, advised Clinton, “We can ask Marina to print this.”

“Revisions to the Iran points” was the subject line of a classified April 2012 e-mail to Clinton from Hanley. In it, the text reads, “Marina is trying to print for you.”

Both classified e-mails were marked “confidential,” the tier below “secret” or “top secret.”

Santos also had access to a highly secure room called an SCIF (sensitive compartmented information facility) that diplomatic security agents set up at Whitehaven, according to FBI notes from an interview with Abedin.

From within the SCIF, Santos — who had no clearance — “collected documents from the secure facsimile machine for Clinton,” the FBI notes revealed.

Just how sensitive were the papers Santos presumably handled? The FBI noted Clinton periodically received the Presidential Daily Brief — a top-secret document prepared by the CIA and other US intelligence agencies — via the secure fax.

A 2012 “sensitive” but unclassified e-mail from Hanley to Clinton refers to a fax the staff wanted Clinton “to see before your Netanyahu mtg. Marina will grab for you.”

Yet it appears Clinton was never asked by the FBI in its yearlong investigation to turn over the iMac Santos used to receive the e-mails, or the printer she used to print out the documents, or the printouts themselves.

As The Post first reported, copies of Clinton’s 33,000 allegedly destroyed e-mails still exist in other locations and could be recovered if investigators were turned loose to seize them. Higher-ups at the Justice Department reportedly have blocked them from obtaining search warrants to obtain the evidence.

It also appears the FBI did not formally interview Santos as a key witness in its investigation.

This is a major oversight: Santos may know the whereabouts of a missing Apple MacBook laptop and USB flash drive that contain all of Clinton’s e-mails archived over her four years in office.

In 2013, Hanley downloaded Clinton’s e-mails from her private server to the MacBook and flash drive.

“The two copies of the Clinton e-mail archive (one on the archive laptop and one on the thumb drive) were intended to be stored in Clinton’s Chappaqua and Whitehaven residences,” the FBI said in its case summary.

But Hanley says the devices were “lost,” and the FBI says it “does not have either item in its possession.”

In addition to Abedin, Santos worked closely with Hanley at Whitehaven and could shed light on the mystery — if only she were asked about it.

When a Post reporter confronted Santos at her DC apartment Friday, she would say only, “I don’t speak to reporters.”

According to a 2010 profile in The Philippine Star, close Clinton friend Vernon Jordan recommended Santos to the Clintons after she worked part-time for him.

Bill Clinton gave a speech in Manila as part of his foundation and took time to visit with the family of the “mayordoma [housekeeper] of his Washington, DC, home — Marina Santos.”

He was quoted as describing Santos as the “wonderful woman who runs our home in Washington, without whom Hillary will not be able to serve as secretary of state.” The article ended remarking, without a hint of irony: “Marina now runs his house so that he and his wife can better serve interests higher than their own.”

Santos could turn out to be the Betty Currie of the Clinton e-mail scandal. Currie was the secretary for President Clinton. She also came recommended by Jordan, and became famous as a central witness in the Monica Lewinsky scandal for her handling of gifts given to Clinton’s mistress.

Investigators had sought the gifts, allegedly hidden under Currie’s bed on orders from Clinton, as evidence.

The State Department and Clinton campaign did not respond to requests for comment.