Notice: Function add_theme_support( 'html5' ) was called incorrectly. You need to pass an array of types. Please see Debugging in WordPress for more information. (This message was added in version 3.6.1.) in /home/kj8d9sfz7jzn/public_html/federalistpress.com/wp-includes/functions.php on line 5831
 Colorado Sheriff Says New Gun Laws Won’t Be Enforced 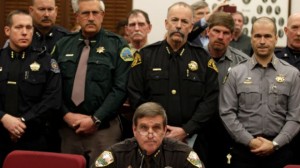 Lawmakers in Colorado on Friday approved a landmark expansion of background checks on firearm purchases. Earlier in the week, Colorado lawmakers approved a 15-round limit on ammunition magazines.

Both measures are awaiting the expected approval of the governor.

that Democrats in the state legislature are uninformed and scrambling in response to the Aurora movie theater shooting and other recent tragedies.

“They’re feel-good, knee-jerk reactions that are unenforceable,” he told the news outlet.

The bill passed Friday expands cases when a $10 criminal background check would be required to legally transfer a gun. Republicans have opposed the bill, calling it an undue burden on law-abiding gun owners.

Cooke said the proposed firearms transfer requirement would not keep guns out of the hands of criminals, according to the GreeleyTribune.com report.

The sheriff told the news outlet that he and other county sheriffs “won’t bother enforcing” the laws because it won’t be possible to keep track of how gun owners are complying with the new requirements.

Cooke is joined in his opposition to the proposals by El Paso County Sheriff Terry Maketa, who told an angry packed crowd at a meeting on Thursday in Colorado Springs he would stand firm against the bills.

“I can’t tell you when those were sold, bought and purchased. As far as I’m concerned, they were all pre-July 1 if the governor does sign this bill,” he said.

Maketa said the proposed laws were hastily crafted and at least one would be unenforceable. A number of Colorado sheriffs are concerned the laws could lead to registration of gun owners, he said.

Maketa said his office keeps records of every concealed carry permit holder in the county as required by law, but he would never share it.

He said he would destroy the database if anyone tried to get their hands on it and would intervene if government agents started arresting county residents for exercising their constitutional rights.

The vice president praised passage of the bill on Friday.

“Congrats to Colorado House and Senate for passing universal background checks,” read a tweet sent by the office of Vice President Joe Biden from his official (at)VP account.

It was followed by another tweet referring to the theater shooting that read, “The families of Aurora deserved a vote and got one. Now U.S. Congress must act too.”

Congress is also considering a number of new firearm restrictions.

Colorado is the first state outside the East Coast to significantly ratchet back gun rights after the theater and school shootings. Colorado’s gun debate was being watched closely because it’s considered a swing state with both a gun-loving frontier past and an unfortunate history of mass shootings, including the 1999 Columbine High School attack.

Expanded checks have been a top priority for Hickenlooper, who called for the proposal during his State of the State address in January.

Both chambers previously approved the expanded checks in slightly different forms. However, both had to agree on an identical bill before passing it to the governor, so a second round of voting was required.

The GOP unsuccessfully tried some last-minute legislative maneuvers on Friday to sink the background-check measure before it was passed 19-14 by the Senate.

Democrats grew frustrated at GOP attempts to imagine scenarios that would trigger background-checks. From 4-H members learning gun safety but needing to borrow a shotgun, to neighbors on weeklong elk-hunting trips, Republicans argued the bill would ensnare harmless gun users.

Democrats insisted that existing exemptions in the bill would cover most scenarios the GOP imagined. The bill’s sponsor, Senate Democratic Leader Morgan Carroll, told Republicans that Democrats had enough votes to pass the measure but extended debate to make small changes requested by Republicans.

Published March 17, 2013  FoxNews.com / The Associated Press contributed to this report.