Notice: Function add_theme_support( 'html5' ) was called incorrectly. You need to pass an array of types. Please see Debugging in WordPress for more information. (This message was added in version 3.6.1.) in /home/kj8d9sfz7jzn/public_html/federalistpress.com/wp-includes/functions.php on line 5831
 Communist Mass Murderer Dictator Fidel Castro Dead at 90 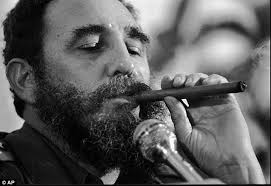 Longtime Cuban leader Fidel Castro, the bearded, cigar-smoking Communist revolutionary who infuriated the United States, inspired both loyalty and loathing from his countrymen and maintained an iron grip on Cuban politics for almost 50 years, died Friday. He was 90.

Hours after his death President Obama issued a statement, saying that at “this time of Fidel Castro’s passing, we extend a hand of friendship to the Cuban people.”

“We know that this moment fills Cubans – in Cuba and in the United States – with powerful emotions, recalling the countless ways in which Fidel Castro altered the course of individual lives, families, and of the Cuban nation” Obama said. “History will record and judge the enormous impact of this singular figure on the people and world around him.”

Castro, the only leader most Cubans ever knew, outlasted 11 US presidents since he first took power in 1959.

Castro’s health had declined in recent years but not enough to stop him from spewing his anti-American rants, almost until the end.

In October, 2014, Castro reprinted a New York Times editorial in state-run media that argued that the U.S. embargo on Cuba should end. The editorial ran almost verbatim, omitting one line about Cuba’s release of political prisoners.

Two years earlier he wrote an opinion piece for a state-run media outlet in which he branded the Republican presidential primary race “the greatest competition of idiocy and ignorance” the world has ever seen.

And just to show how much his volatile presence lingered in American politics, despite officially handing over power to his brother Raul in 2008, Castro was the subject of a question during a Republican candidates’ debate in Tampa, Fla. the same month the piece ran.

When Mitt Romney was asked what was the first thing he would do as president if he found out Castro was dead, he replied, “Well first of all, you thank heavens that Fidel Castro has returned to his maker and will be sent to another land.”

When it was his turn to answer, Newt Gingrich said, “I don’t think that Fidel is going to meet his maker. I think he’s going to go to the other place.”

The lawyer, revolutionary and political leader who triggered such visceral reactions was born August 13, 1926 out of wedlock to a Cuban sugar plantation owner and a servant in his home. (They eventually married.) He was not formally recognized by his father until he was 17, when his surname was changed to Castro from Ruz, his mother’s name.

Though he spent the better part of his life railing against capitalism and the rich, Castro enjoyed a wealthy and privileged childhood.

He attended Jesuit boarding schools, and developed a love for sports, pitching for El Colegio de Belen’s baseball team. He attended the University of Havana law school, where he joined groups that focused on Cuban nationalism and socialism.

After graduation and now a revolutionary, he took up arms against the government of President Fulgencio Batista, leading a failed 1953 attack on a military barracks in hopes of triggering a popular revolt.

Instead he was captured and at his trial, where he led his own defense, famously predicted “history will absolve me.”

After spending time in prison, Castro went into exile in Mexico, where he met Ernesto “Che” Guevara, who became his confidante.

Castro established another guerrilla force and after several years of fighting, eventually defeated Batista in 1959, taking control of Cuba at the age of 32.

After being sworn in as prime minister, Castro began a series of reforms, many designed to end US economic power on the island. Relations between the two countries frayed and when Castro visited the US later that year, President Dwight Eisenhower refused to meet with him.

At the same time, Castro’s government began to establish relations with the Soviet Union. In April 1961 Castro formally declared Cuba a socialist state just days before the disastrous Bay of Pigs invasion that saw 1,400 Cuban exiles trained by the CIA unsuccessfully attempt to invade and topple his government.

Castro intensified relations with the Soviet Union and in 1962 US reconnaissance planes discovered Soviet missiles on their way to Cuban sites, precipitating a tense standoff between President John F. Kennedy and Soviet Premier Nikita Khrushchev.

But in the 1980s, Russia stopped taking Cuban sugar, causing widespread economic deprivation that resulted in thousands of Cubans trying to flee to the US by sea.

Castro often spoke with resentment and disgust of the Cubans who left the island because of his government, particularly those who went into exile in the United States.

He called Cuban exiles “guzanos,” the Spanish word for “worms,” and complained about the Miami Mafia that always sought his ouster.

Cuban exiles responded with equal disdain, with many forming organizations solely focused on getting Castro out of power.

Rumors of his death ran rampant in Cuban communities many times over the decades.
In a 1988 speech, Castro said: “I think I hold the dubious record of having been the target of more assassination attempts than any politician, in any country, in any era.”

“The day I die, nobody will believe it.”

Castro served as prime minister until 1976, when he became president, serving in that position until 2008, when an ailing Fidel handed over power to his younger brother Raul.

He remained as First Secretary of the Communist Party until April 2011.

And even when officially out of office, he remained the best known figure in Cuba.

“Men do not shape destiny,” he once said. “Destiny produces the man for the hour.”

Along the way he was a prime enemy of the US and there were reports of the CIA trying to topple him in a variety of ways, although some suggestions – like an exploding cigar – seemed to border on the absurd.

Castro’s personal life was complicated and private. He was believed to have one son by a first marriage, an illegitimate daughter from another relationship, five sons from a second marriage and another son by an unnamed mother.