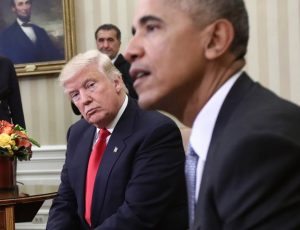 The Obama Administration struggled through one Congressional investigation after another, with the Departments of State, Justice, Treasury, Homeland Security, and Agriculture all getting their turn on the hot seat.  Interestingly, the public never really connected these scandals to Obama, instead associating Lois Lerner, Janet Napolitano, Eric Holder, Hillary Clinton, and other career bureaucrats with the various investigations.  When President Obama first took office, his administration focused on placing political appointees in various government positions of influence.  Performance may have suffered when someone unqualified individual took over a powerful agency, but concern for the average citizen was not on the list of priorities.  In some instances, persons were appointed to certain positions for specific purposes.  Leon Panetta, whose intelligence experience was limited to two years as an Intelligence Officer in the Army from 1964 to 1966, was appointed Director of the CIA in 2009.  Panetta spent two years as CIA Director, which was more than enough time to conduct an internal investigation into the interrogation practices of the agency under the Bush Administration.  Lerner, Napolitano, Holder, and Clinton closely followed the script, as none of the scandals involving these agencies were ever connected to Obama.

President Obama was particularly adept at manipulating public perception.  Without exception, during every political crisis the GOP took the hit.  The Republicans were responsible for the shutting down of government over budget disagreements, and because the Republicans were so obstructionist, the President was forced to address prolific legislation through the use of Executive Orders.  At times, it appeared as if Obama would not find a way to avoid criticism.  The U.S. role in crafting the nuclear Treaty with Iran, and the subsequent night-time delivery of  four-hundred million dollars to the Iranians, not to mention the gift of one-hundred thirty tons of Uranium, didn’t seem to sit well with the American people.  But the Democratic Party, Congressional Democrats in particular, in-step with the main stream media, put out the fire in shockingly quick fashion.  The weak-kneed Republican Congressional leadership probably was too tired of fighting the fight, and focused instead on upcoming elections, which brings us to a big part of the problem.

A friend who works on the staff of a GOP Congressman frequently complains about how much time is allotted to campaigning.  He remarked that the next campaign always begins the morning after winning an election.  For a number of reasons, members of Congress are never prepared to move on to a live outside of Capitol Hill.  No doubt the most common reason for wanting to get re-elected in perpetuity is the sense of power public office can provide.  In addition, the great majority of Congressmen and women have enriched themselves while serving, which is why I am always pleasantly surprised when I learn of a Senator or a Representative from any political background who has not become a millionaire while in office.  These politicians take the access they are afforded through their position very seriously, which explains why so many Republican Congressmen refuse to support President Trump.  The Democrats have demonstrated how successful a president can be regarding his/her agenda, with the support of a united party, but the message just hasn’t caught on with the right.  Republicans on Capitol Hill are constantly worried about Trump’s “numbers”, because they don’t want to lose votes in the next election by supporting a damaged president . . .

Read the rest of the story >>

By Eric Burkhart of Mukhabarat, Baby.

Visit Eric’s website and read a free sample of his new book at http://www.mukhabaratbaby.com/
Follow me on Twitter @mukhabaratbaby – Email me at mukhabaratbaby@gmail.com
Eric Burkhart is a retired CIA agent, who has written a book about his service, and he shares some unique insights into what really happened in the Middle East during the Gulf War.