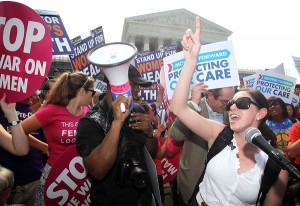 Since the Supreme Court’s ruling on the President’s healthcare law a few weeks ago, a lot of people on both sides of the issue have asked about my reaction to it. It probably goes without saying at this point that I think the law was an enormous mistake from a policy standpoint – $800 billion in new taxes ($675 billion in the most recent estimates by the Joint Committee on Taxation plus roughly another $125 billion in taxes from their 2010 estimates of the individual mandate, employer mandate, and other revenues – likely to go up further), plus $500 billion in cuts to Medicare, zero done to control the growing costs in healthcare, etc – but setting aside the specific issue of health reform, my biggest concerns surround the ruling itself and the precedent it sets. These are issues that frankly, I think the media has a responsibility to make sure Americans are informed about.

Here is the short version. The Supreme Court ruled that the individual mandate requiring Americans to buy health insurance could not be allowed under Congress’ constitutional authority to regulate interstate commerce. The Court said very plainly that the federal government does not have the authority to require you to buy something and penalize you for failing to do it.

But in the same breath, citing Congress’ authority to levy taxes, the Court said that although the federal government can’t force you to buy health insurance, they can compel you to buy it by taxing you if you don’t. In a nutshell, the government can’t fine you for not buying something, but they can hit you with a tax penalty if you don’t… I frankly don’t see a meaningful difference between the two.

Think about it this way: the federal government has long been able to encourage certain behavior through the tax code (think about the mortgage interest tax deduction), but it has never been able to compel you to go out and buy a house by threatening to hit you with a tax penalty if you didn’t. That is a huge difference. On page 39 of his majority opinion, Chief Justice John Roberts used the example of energy efficient windows. He suggested that although the federal government couldn’t require you to buy energy efficient windows, it could essentially force you to do so by levying a tax on you if you don’t.

I don’t think anybody out there disputes the benefits of having health insurance or lowering your electricity bill, but in the United States of America, those decisions have always been up to the people – not up to the federal government. And regardless of how you feel about the healthcare law, I think this is something that all Americans should consider very carefully. Should Congress have the power to force American citizens into buying things that they don’t want? Should the federal government be able to force you to buy a certain car, or windows, or insurance, or anything else that the Congress thinks you should have? Is that a power that We The People want to surrender?

I don’t believe it is. But that’s what the Supreme Court has done here. Regardless of whether or not the President’s healthcare law is repealed, the precedent has been set. The government now has the legal authority to force you to buy things. That wasn’t the case before the ruling and it is not something that is easily undone. Following on the heels of our Independence Day, when all Americans gather together to celebrate our freedom and the sacrifices of those who made it possible, this is an issue that I think we should all consider very carefully. Are we less free as a people in the wake of this ruling and is that something we should be comfortable with?

You know where I stand.