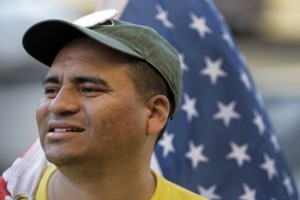 The Internal Revenue Service scandal involving the apparently unjustified targeting of Tea Party and other conservative groups has also hit home with the Hispanic community.

George Rodriguez, former president of the San Antonio Tea Party, said that when the organization applied for non-profit status, leaders were intimidated by IRS workers with excessive paperwork and meddling questions.

“They asked us all sorts of things that were out of the norm,” Rodriguez, now head of the conservative South Texas Alliance, told Fox News Latino. “We knew these questions were not the norm and we had our suspicions about them.”

The complaint from the San Antonio group is just one of many nationwide leveled against the federal agency, which surfaced last Friday when Lois G. Lerner director of the IRS’s exempt-organizations division, let slip  that low-level IRS staffers had given extra scrutiny to conservative groups with words such as “tea party” or “patriot” in their names.

The public slip started a furor among conservative groups and pundits and forced U.S. Attorney General Eric Holder to announce that the Justice Department would open a criminal investigation into the matter.

Rodriguez said the group received a questionnaire from the IRS with “well over 50 questions,” including inquiries into who the group met with, where they held their meetings, who was in attendance and what the subject of their internal emails were.

“They should have been worried about the numbers, not who we were meeting with,” he added. “It was flat-out dirty politics.”

The complaint from the San Antonio group is  one of many nationwide leveled against the embattled federal agency, in the escalating case that surfaced last week when Lois G. Lerner, director of the IRS’ exempt-organizations division, let slip that low-level IRS staffers had given extra scrutiny to conservative groups with words such as “tea party” or “patriot” in their names.

Republicans have pressed the Obama administration for heads to roll. On Wednesday, Obama asked for and received the resignation of the agency’s acting commissioner, Steve Miller.

The scandal sparked a furor among conservative groups and pundits, forcing U.S. Attorney General Eric Holder to announce that the Justice Department would open a criminal investigation into the matter.

Holder followed the announcement by adding Wednesday that the FBI’s criminal investigation could include charges of civil rights violations, false statements and potential violations of the Hatch Act, which prohibits federal employees from engaging in some partisan political activities.

The revelations also spurred calls for investigations into the practices of the administration of President Barack Obama and allegations of a potential cover-up operation.

“It’s an abuse of power and it smells of Watergate,” said Bob Quasius, the president of the conservative Latino group Café con Leche, referring to the political scandal that led to the impeachment of President Richard Nixon.

“I think it goes to the top levels of his administration,” Quasius added. “If it doesn’t directly connect to him it at least connects to someone close to him.”

So far, however, there has been no evidence directly linking the Obama administration to the IRS mess-up. For its part, the administration has tried to portray the scandal as something done independently of the federal government in Washington by the IRS field office in Cincinnati.

The federal government enacted strict measures following the Watergate scandal to keep the executive branch of government away from the IRS, making it very difficult for the president to interfere in the agency’s affairs.

Of the 296 applications for nonprofit status the inspector general reviewed, the San Antonio Tea Party was one of the 108 that were approved. Of the others, 28 were withdrawn by the applicants and 160 were still open.

Despite the approval of the group’s application, which Rodriguez said required the help of the American Center for Law and Justice, he still believes that the hoops it had to jump through were indicative of the “shenanigans” that were going on in the IRS.

“We understand we need to show we’re a nonprofit,” Rodriguez said. “But these questions were way beyond what the norm is and were way out of line.”