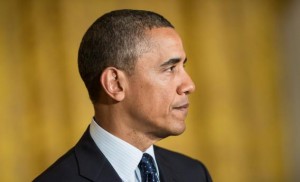 The outgoing commissioner of the IRS apologized Friday for his agency’s practice of targeting conservative groups, calling the actions “foolish” while claiming it was not motivated by partisanship.

“As acting commissioner, I want to apologize on the behalf of the Internal Revenue Service for the mistakes that we made and the poor service provided,” Steven Miller, the outgoing commissioner, said at the first congressional hearing on the scandal. “The affected organizations and the American public deserve better.”

He said he doesn’t think the agents responsible were motivated by partisanship, but said “foolish mistakes were made by people trying to be more efficient.”

A top Republican also claimed at the start of the hearing that the details that have emerged about the IRS’ targeting of conservative groups are “just the tip of the iceberg.”

Rep. Dave Camp, R-Mich, chairman of the House Ways and Means Committee, ripped the tax-collecting agency over the practice at the start of the hearing. “Now we know the truth — or at least some of it,” he said. “We also know that these revelations are just the tip of the iceberg. It would be a mistake to treat this as just one scandal.”

He questioned how high the scandal went, and also suggested there was other targeting of conservatives that has not yet been acknowledged by the agency. He called it part of a “culture of cover-ups.”

“This systemic abuse cannot be fixed with just one resignation, or two,” he said. He said the problem is not just personnel, but the size and scope of the IRS.

The inspector general who released a scathing report on the agency also testified Friday. J. Russell George — the Treasury Inspector General for Tax Administration — said his findings raised “troubling questions” about the agency, while claiming some of the wrongdoing was apparently done with no-to-little supervision.

But he said all three allegations against the agency turned out to be true — that it was using “inappropriate criteria” to screen conservative groups, it was delaying applications and it was asking unnecessary questions.

Rep. Sander Levin, D-Mich., the top Democrat on the committee, said the agency’s management “completely failed the American people.” At the same time, he urged Republicans not to use the hearing to “score political points.”

Lawmakers on both sides of the aisle are sure to have plenty of questions for Miller, as they search for who was responsible for the program. Outrage mounted after lawmakers learned that the IRS official who led the tax-exempt organizations unit when the targeting took place — Sarah Hall Ingram — has since moved over to the IRS office responsible for ObamaCare.

The acknowledgement comes after the administration announced that Ingram’s successor Joseph Grant — who had only been on the job a few days — would be retiring.

The agency released a memo Thursday night written by Grant. In the memo, Grant acknowledged “errors” but said the program was started to deal with an influx of applications, as well as allegations that some of the groups were engaged in political activity that would be “impermissible” under the tax-exempt status they were seeking.

President Obama, meanwhile, maintained Thursday that he didn’t know about the investigation into the IRS program until it was made public.

The ObamaCare official now drawing scrutiny had been serving as commissioner of the office responsible for tax-exempt organizations from 2009 to 2012 — the division included the group that targeted Tea Partiers — and has since left to serve as director of the IRS’ Affordable Care Act division. That unit is responsible for enforcing parts of the health care law, including the fines associated with the so-called individual mandate — the requirement to buy health insurance.

Texas Republican Sen. John Cornyn, citing her current position and history with the scandal-marred unit, reinforced his call Thursday for the IRS to be blocked from implementing the health care law. “Now more than ever, we need to prevent the IRS from having any role in Americans’ health care,” he said.

The revelations at the Friday hearing could add more headaches for the Obama administration, as it tries to juggle its response to several scandals at once.

It’s unclear whether more officials will resign at the IRS in the days to come. This week’s clean-up at the agency is part of the Obama administration’s mad dash to save face and regain footing after being hammered by a series of scandals this week, including new questions over the Benghazi terror attack and the Justice Department’s seizing of journalists’ phone records.