Notice: Function add_theme_support( 'html5' ) was called incorrectly. You need to pass an array of types. Please see Debugging in WordPress for more information. (This message was added in version 3.6.1.) in /home/kj8d9sfz7jzn/public_html/federalistpress.com/wp-includes/functions.php on line 5831
 Dictator Hugo Chavez Dead

The dictator of Venezuela, Hugo Chavez, has died. 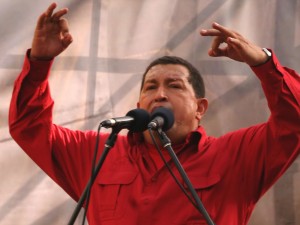 It was reported in the Venezuelan press earlier today that their president was suffering from a complication of infection, a normal result of the chemotherapy that the strongman was receiving for cancer.

Vice President Nicolas Maduro announced the sudden and unexpected death of the anti-American dictator this afternoon, claiming that the infection may have been the result of US skulduggery.

While freedom loving people around the globe could only hope that a despot like Chavez would meet with an untimely death, it is now yet to be seen if the people of Venezuela manage to throw off the shackles of totalitarianism and install competent leadership.