Notice: Function add_theme_support( 'html5' ) was called incorrectly. You need to pass an array of types. Please see Debugging in WordPress for more information. (This message was added in version 3.6.1.) in /home/kj8d9sfz7jzn/public_html/federalistpress.com/wp-includes/functions.php on line 5831
 DEAD – Aaron Hernandez, Former NFL Player, Commits Suicide in Prison 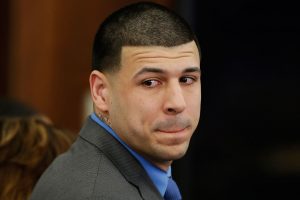 Aaron Hernandez, the former New England Patriots star who was convicted of murder in 2015, killed himself in his prison cell Wednesday morning, officials said.

Hernandez, 27, was found hanging in his cell by corrections officers around 3:05 a.m. at the Souza Baranowski Correctional Center, Massachusetts Department of Correction officials said in a statement.

He was pronounced dead an hour later.

Hernandez was in a single cell in a general population housing unit and hanged himself with a bed sheet attached to his cell window. He also tried blocking his door from the inside with various items, officials said.

An investigation was ongoing.

Hernandez was not on a suicide watch and authorities had yet to find any suicide note in his cell, The Boston Globe reported. Officials said Hernandez had given no indication he might try to take his own life.

“If he had made any kind of statement, he would have not been in that unit,’’ Department of Correction spokesperson Christopher Fallon said.

The death of the once-promising NFL tight end came almost two years to the day when he was convicted of first-degree murder in the death of semi-pro football player Odin Lloyd. The 15th selection in the 2010 NFL draft, Hernandez was arrested in August 2013 in connection with Lloyd’s June 2013 death.

On April 14, Hernandez was found not guilty in a double homicide separate from the Lloyd case; however, he was already serving a life sentence without the possibility of parole in connection with Lloyd’s murder.

The disgraced NFL star played three seasons with the Patriots, scoring 18 touchdowns and forming a fierce tight end tandem with Rob Gronkowski. He had two touchdowns in six playoff games, including eight catches for 67 yards and a touchdown in the Patriots’ Super Bowl XLVI loss to the Giants.

But his seemingly ascendant career came crashing down when police began investigating Lloyd’s murder and eventually came to finger Hernandez as the trigger man. The Patriots quickly cut Hernandez from the team prior to the 2013 season.

The Patriots had yet to comment on the death of Hernandez, but the team was set to be at the White House on Wednesday in honor of their Super Bowl LI victory.