Notice: Function add_theme_support( 'html5' ) was called incorrectly. You need to pass an array of types. Please see Debugging in WordPress for more information. (This message was added in version 3.6.1.) in /home/kj8d9sfz7jzn/public_html/federalistpress.com/wp-includes/functions.php on line 5831
 Debate Heavyweight – Candy Crowley 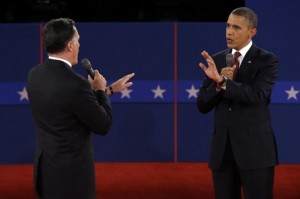 In last night’s second presidential debate, hosted at Hofstra University in New York, the candidates came out swinging. It was clear that President Obama’s handlers had taken him to the woodshed over his first debate performance, notwithstanding his own assessment of the debate–that he had won it handily–and he was prepared to engage Mitt Romney aggressively.

Indeed, the candidates sparred over issues on the economy, entitlements, energy, and foreign policy, with Obama claiming that his first term has been a resounding success, and Romney tearing the president’s performance apart and laying out his own plan to add 12,000,000 jobs in his first term. The debate was animated, and the candidates relentless in their resolve to hold their ground . . . looking as though they were ready to take it out to the parking lot on a few occasions.

Obama was tireless in his efforts to convince viewers that he has turned in a stellar performance in his first term, and that he deserves their nod for a second. Romney turned and spoke to the audience, saying, “I think you know better. I think you know that these last four years haven’t been so good as the president just described and that you don’t feel like you’re confident that the next four years are going to be much better either. I can tell you that if you were to elect President Obama, you know what you’re going to get. You’re going to get a repeat of the last four years. We just can’t afford four more years like the last four years.”

At an especially contentious point near the close of the debate an audience member asked Obama about the administration’s failure to provide the requested security for our embassy in Benghazi, Libya, prior to the attacks that killed four Americans. “Who was it that denied enhanced security and why?”

Obama fired back indignantly, “The suggestion that anybody in my team … would play politics or mislead when we’ve lost four of our own, Governor, is offensive. That’s not what we do.” Of course, that is exactly what Obama and his administration do, but he made the claim with a straight face. Obama then claimed that he had designated the assault a terrorist attack from the beginning, calling it that the following day in a Rose Garden press conference. 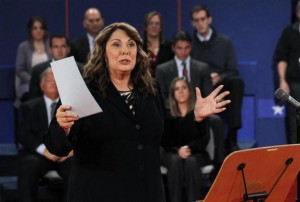 Romney bristled at the remark, reminding the public that Obama and his people had claimed repeatedly for the next 14 days that the assault was a “spontaneous demonstration” spawned by the existence of a YouTube video. Moderator Candy Crowley (CNN) was quick to interrupt, waiving some papers she had picked up, saying, “It — it — it — he did in fact, sir. So let me — let me call it an act of terror.”

Obama asked her to repeat it, and she dutifully complied. “He — he did call it an act of terror.” Romney seemed confused by the assertion, based on weeks of Administration obfuscation, and said he wanted to get the claim into the record.

After the debate Crowley was forced to recant her assertion, based on the actual presidential transcript of Obama’s Rose Garden statement, which makes it clear that Obama was doing his best to include the word “terror” without actually saying the incident was a terror attack. After mentioning 9/11, Iraq and Afghanistan, the president had stated, “No acts of terror will ever shake the resolve of this great nation, alter that character or eclipse the light of the values that we stand for.” He then moved on to the Libya attack, not calling it a terrorist attack, and sent out Administration officials for the following 2 weeks with the story about a “spontaneous demonstration” turned violent. Certainly, no news agencies reported during that time that the president had claimed the assault was a terrorist attack.

In fact, the Administration’s position has been that Obama is personally responsible for wiping out al-Qaeda, having dispatched Osama Bin Laden with his own bare hands, and that his policies have brought peace to the Middle East and the friendship of Muslims everywhere. The reality is much different, of course, but it is that narrative which drove the Administration’s efforts to cover up the terrorist attack on on our diplomats in Benghazi.

Overall, the debate was a feisty display of unmitigated testosterone . . . and the presidential candidates were a little testy too. Crowley did the same thing that moderators in the first two debates did–cover for the Democrat, interrupt and cut off the Republican, and ensure that the Dem gets more speaking time; over 3 minutes more in this debate.

Although there appears to be a general consensus that Dems will believe that Obama won the debate and GOP will believe Romney won, political pollster Frank Luntz conducted a focus group in Nevada, a swing state, during the debate, made up of undecideds, most of whom voted for Obama 4 years ago. The conclusion of this focus group was that although Obama turned in a good performance, it was nothing more than empty rhetoric, too little too late, and that another 4 years of his policies would be toxic to our nation. In contrast, they nearly unanimously agreed that Romney is a seasoned businessman who understands the economy and how to create jobs, and that it is time to put him into the White House. That cannot be good news for an administration hopeful that Romney’s momentum would be slowed if the president performed well.