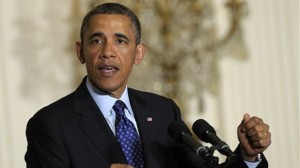 One of the key selling points in President Obama’s 2010 health law was that small business owners would be able to offer more insurance options to their employees.

But according to a New York Times report today, that benefit, set to kick in at the beginning of 2014, will be delayed for at least a year as federal regulators and insurance companies struggle to offer the expanded options.

This is partly a consequence of Obama relying on private insurance companies to implement his legacy law. With premiums already rising as a result of the law and set to increase by nearly a third on average with the full imposition of the new rules, insurance companies are in a strong position to demand a slowdown of the law.

With Midterm Elections just ahead and Obama still unable to rally much public support for the law, the administration is not keen to push costs even higher, especially as middle-class families are feeling the squeeze of higher taxes and higher fuel costs.

The stumbling start for Obama’s law ahead of the beginning of enrollment in its new health-insurance entitlement program is proving to be a major headache for the president. Enrollment in the federally subsidized insurance program – the centerpiece of the law – is set to begin on Oct. 1. But despite delaying the start of the program for nearly four years from the signing of the law, the federally funded insurance system does not look ready for liftoff.

With Democrats voting to cut out a key tax funding the program and the Department of Health and Human Services up to its eyeballs in delays, waivers and the difficulties of stitching together a patchwork system, the fate of what the president called “Obamacare” is looking uncertain.

Meanwhile, Senate Republicans are preparing to drag the controversial law into the budgeting process this summer. Obama is looking for a full-year fiscal plan that would provide enough borrowing authority to get to the next elections when voters might break the deadlock in Washington. The uncertainty about the law and its growing number of missed expectations enhances the ability of Senate Majority Leader Mitch McConnell and others to make the still-pending Obama entitlement part of the discussion.

Dissatisfaction with the law and the bureaucratic botch of its implementation makes Obama’s legacy program a much riper target for changes and legislative delays.

Dissatisfied Democrats may be willing to sacrifice parts of the law or slow its imposition before they are willing to meddle with popular programs like Medicare. It was politically helpful for Obama to shove the difficult or unpopular laws beyond his re-election bid. Some Senate Democrats may find it appropriate to return the favor.

One of the main claims the president made in selling the law, aside from the promise of helping small businesses, was that individuals happy with their insurance and doctors would not have to make changes. Obama later clarified that he meant the government would not force citizens to change, but allowed that government regulations would cause employers, doctors and insurers to drop individuals, stop offering services or raise prices.

But the changes are coming fast as employers prepare to jettison workers from health care plans, doctors retire or stop accepting government insurance and insurers jack up rates to cover new costs.

The delay of the expanded menu of insurance offerings will almost certainly accelerate the process.

Currently, small businesses are weighing whether to drop health insurance altogether. Obama’s law requires businesses to offer coverage of a certain caliber, above the above the basic catastrophic coverage offered by many companies. For many of them, it will be cheaper to pay the fines imposed for employers who offer no coverage at all or drop full-time workers down to part-time status to avoid the requirements.

The Congressional Budget Office already foresees some 8 million insurance customers getting dropped by employers. That’s more than before and the number will go up with this change and others still to come.

During the debate of the law, a key promise was that new regulation would require insurance companies to offer a broader menu of insurance choices to small businesses across a range of price points.

But if insurers are only offering one, more expensive health plan to small shops there will be even more employers who decide to get out of the game altogether and dump their workers onto taxpayer-subsidized insurance programs. Given the choice between that and being made part-time employees or seeing their paychecks shrink with higher premiums, many workers may prefer being dumped.

(Power Play will leave for another time the consideration of how much payroll tax fraud the new law will engender as small businesses pay “part-time” workers full-time wages. Woof.)

All of this will raise costs and dissatisfy consumers, yes. But the members of Team Obama also know that as long as implementation is lurching forward it becomes harder to uproot the system, no matter how expensive or unwieldy. That’s why Republicans are hoping to use these myriad problems and cost overruns to delay the system. Repeal or alteration remains possible as long as the system isn’t in place.

Obama’s decision to ram through the health law when it was still a jumble, especially using a procedural trick, was predicated on the belief that after he was re-elected he could put the law into place.

But the jumble persists and now threatens his legacy project.

And Now, A Word From Charles

“The Episcopal Church, it used to be said of it a generation ago it was the establishment at prayer. And now, it’s the American left at prayer. And I think that’s one of the reasons why it and the other mainline denominations are in such decline. Because if you want a message like what Reverend Leon delivered you go to a Democratic Party meeting or a pro-choice rally, you don’t go to church.”