New Jersey Democratic Sen. Cory Booker injected chaos into Judge Brett Kavanaugh’s Supreme Court confirmation hearing Thursday as he vowed to release a confidential Kavanaugh email with the backing of Democrats in violation of Senate rules, calling it an act of “civil disobedience” and drawing condemnation from the Republicans on the committee.

“I am going to release the e-mail about racial profiling and I understand that the penalty comes with potential ousting from the Senate,” Booker said at the beginning of the third day of Kavanaugh’s confirmation hearing.

The New Jersey Democrat said he would “knowingly” violate the Senate rules to release the email. Other Democrats on the committee expressed their support for the effort.

A day earlier, in a dramatic exchange, Booker implied Kavanaugh had been open to racial profiling tactics, citing an email exchange between Kavanaugh and a colleague. However, Booker did not provide Kavanaugh a copy of the emails to review while questioning him about it, prompting another objection from Lee, who charged that it was inappropriate to “cross-examine” Kavanaugh about documents that he “can’t see.”

Booker said Thursady he would release it anyway, saying the document is a “great illustration of the absurdity of the process” because there’s nothing in it that’s “national security-related.”

“I come from a long line, as all of us do as Americans, that understand what that kind of civil disobedience is and I understand the consequences,” Booker said. 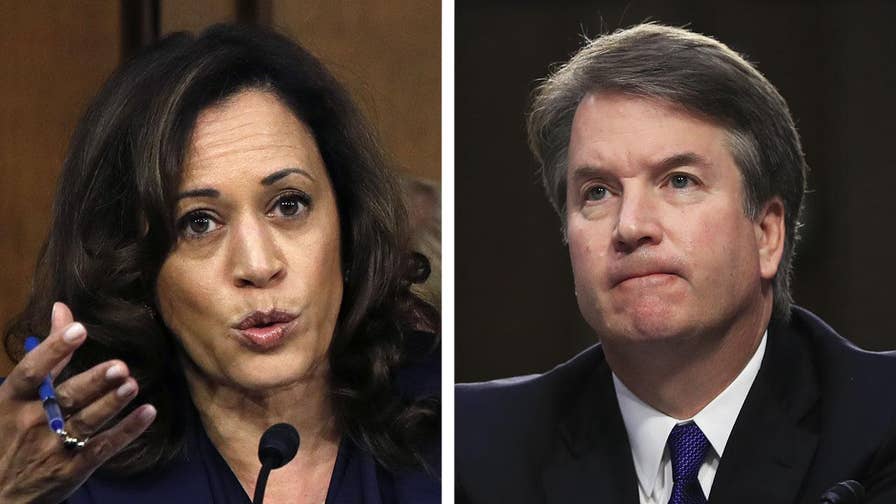 Top Republicans mocked and denounced Booker, thought to be considering a 2020 campaign for president, for the move.

“Running for president is no excuse for violating the rules of the Senate or of confidentiality of the documents that we are privy to,” Texas Sen. John Cornyn told Booker.

“Can I ask you how long you’re going to say the same thing three or four times?” Grassley asked.

“I’m saying I’m knowingly violating the rules,” Booker replied. “Senator Cornyn has called me out for it.”

“How many times are you going to tell us that?” Grassley replied.

It came as Kavanaugh entered the final stretch of questioning in his confirmation hearing Thursday, with Democrats springing a series of cryptic questions – in an apparent attempt to box the nominee into an embarrassing admission or at least throw him off what has been a relatively steady performance.

Other lines of questioning were more mysterious, suggesting an effort to lay a trap.

In an especially combative moment late Wednesday, Sen. Kamala Harris, D-Calif., asked Kavanaugh whether he ever had discussed Special Counsel Robert Mueller or his Russia probe with anyone at Kasowitz Benson Torres, the law firm founded by Marc Kasowitz, a former personal attorney to President Trump.

“Be sure about your answer,” Harris warned. “I’m asking you a very direct question. Yes or no?”

“I’m not sure I know everyone who works at that law firm,” Kavanaugh said. “I’m not remembering, but I’m happy to be refreshed.”

“How can you not remember whether or not you had a conversation about Robert Mueller or his investigation with anyone at that law firm?” Harris asked, visibly exasperated. “This investigation has only been going on for so long, sir, so please answer the question.”

“I’m just trying to think — do I know anyone who works at that firm?” Kavanaugh eventually replied. “I’d like to know the person you’re thinking of.”

“I think you’re thinking of someone and you don’t want to tell us,” Harris shot back, sending the room into a few seconds of near-total silence.

Utah Republican Sen. Mike Lee then interjected briefly to defend Kavanaugh, saying that “this town is full of law firms” and that they “are constantly metastasizing, they break off, they form new firms — they’re like rabbits. There’s no possible way we can expect this witness to know who populates an entire firm.”

A barrage of protesters erupted in a chant of “Answer the question” before being led out by police as Lee spoke. In all, 73 people were arrested and charged for unlawful demonstrations within Senate buildings on Wednesday, including 66 people who were removed from the hearing room during the day, according to Capitol Police officials.

Also Wednesday evening, Hawaii Democratic Sen. Mazie Hirono pressed Kavanaugh at length about whether he was aware of inappropriate behavior by former 9th Circuit Judge Alex Kozinski when he clerked for Kozinski from 1991 to 1992. Kozinski abruptly retired last year after several woman who had worked as law clerks or colleagues accused him of sexual misconduct that included touching, inappropriate sexual comments and forced viewings of pornography in his chambers.

Hirono, who repeatedly has asked other judicial nominees whether they ever sexually harassed anyone, noted that Kavanaugh and Kozinski had kept in touch after his clerkship, with Kozinski recommending Kavanaugh during his 2006 confirmation hearings for his current job on the D.C. Circuit Court of Appeals.

“You saw nothing, you heard nothing, and you obviously said nothing,” Hirono said, even as Kavanaugh denied being aware of any misconduct by Kozinski and said he would have reported it if he had known.

For the most part, the hearings have focused on Kavanaugh’s writings and, in particular, key opinions he authored while serving on the nation’s most prestigious appellate court.

The confirmation hearing has been chaotic at times, with Democrats trying to delay the proceedings as they complain they haven’t received enough records from Kavanaugh’s past work.

Sen. Patrick Leahy, D-Vt., pressed Kavanaugh about what he knew about the Bush administration’s warrantless surveillance program. Leahy also asked Kavanaugh if a president has a right to pardon himself, a power President Trump has said he believes he has.

“The question of self-pardons is something I have never analyzed,” Kavanaugh replied.

Outbursts from protesters have been a recurring feature since the hearings began. Moments after Senate Judiciary Committee Chairman Chuck Grassley opened the hearing Wednesday, shouting could be heard from the back of the room: “Sham president, sham justice!” Ironically, at one point, protesters shouted as Kavanaugh discussed how he tried to be respectful in court. “I’ve tried to be a very collegial judge, I’ve tried to be civil,” he said.

Kavanaugh served for more than a decade on the D.C. Circuit Court of Appeals and, before that, for five years as a lawyer in the White House Counsel’s office in the George W. Bush administration. He also worked for independent counsel Ken Starr for three years during the probe that led to the impeachment of former President Bill Clinton.

Kavanaugh’s elevation from the D.C. Circuit Court of Appeals to the Supreme Court would mark a generational rightward shift on the Supreme Court, raising the stakes beyond those of last year’s nomination of Neil Gorsuch.

The judge’s nomination, though, will ultimately succeed or fail depending on a handful of swing-vote senators, including vulnerable red-state Democrats and moderate pro-choice Republicans who have all said that they would withhold judgment on the nominee.

Republicans command a narrow 51-49 Senate majority. Party leaders have said they hope to have Kavanaugh confirmed by a floor vote by early October, when the next Supreme Court term begins.