Notice: Function add_theme_support( 'html5' ) was called incorrectly. You need to pass an array of types. Please see Debugging in WordPress for more information. (This message was added in version 3.6.1.) in /home/kj8d9sfz7jzn/public_html/federalistpress.com/wp-includes/functions.php on line 5831
 Democratic Sen. Levin Pressured IRS to Investigate Conservative Nonprofits 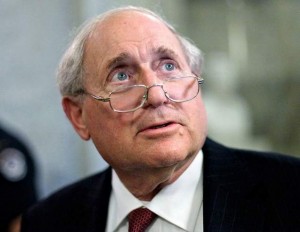 Levin said he was concerned nonprofit organizations were abusing their tax-exempt status and engaging in partisan politics and requested information from the IRS on 12 organizations.

“Organizations are using Internal Revenue Code section 501(c)(4) to gain tax exempt status while engaging in partisan political campaigns,” wrote Levin in one letter on July 27, 2012. “Making the problem worse is that the IRS knows there is a problem because of the public nature of the activity but has failed to address it.”

He asked whether the 12 organizations “applied for [tax-exempt status]; and if so … received the described exemption for political activity from the IRS.”

The IRS officials were reportedly already aware that the agency had been targeting conservative groups for special scrutiny during the time Levin was corresponding with Shulman and Lerner.