Notice: Function add_theme_support( 'html5' ) was called incorrectly. You need to pass an array of types. Please see Debugging in WordPress for more information. (This message was added in version 3.6.1.) in /home/kj8d9sfz7jzn/public_html/federalistpress.com/wp-includes/functions.php on line 5831
 Democrats Look for Answers After Devastating Election 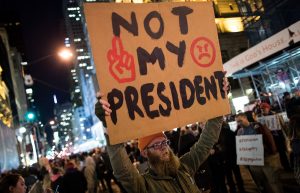 Hours after the arrest of 17 progressive protesters at a sit-in at New York Sen. Charles “Chuck” Schumer’s office, President Barack Obama said Democrats will be doing some healthy reflection after the pounding the party took in last week’s national election.

The progressive wing of the Democratic party, which backed Vermont Sen. Bernie Sanders’ presidential primary challenge to eventual nominee Hillary Clinton, wants to double down on its agenda. It blames Clinton’s supposed centrist stance and close ties to Wall Street for the loss to Republican Donald Trump on Nov. 8.

Some of this will play out in the coming months in the competition to be the next Democratic National Committee chairman.

The President and Protesters

“When your team loses, everybody gets deflated and it’s hard and it’s challenging and so I think it’s a healthy thing for the Democratic Party to go through some reflection,” Obama, who as president is the outgoing titular leader of his party, said in a press conference Monday. “I think it’s important for me not to be big-footing that conversation. I think we want to see new voices and new ideas emerge.”

“When your team loses, everybody gets deflated,” @POTUS says.

“I believe that we have better ideas, but I also believe that good ideas don’t matter if people don’t hear them and one of the issues that Democrats have to be clear on is that, given population distribution across the country, we have to compete everywhere,” Obama said.

The 45 millennial activists, calling themselves “All of Us 2016,” made two demands: that Democrats vow to never negotiate with President-elect Trump and that Schumer step aside from his designated role and endorse Sanders to be the party’s Senate leader.

“The Democrats cannot negotiate with a racist, fascist President Trump, they must filibuster all day and all night to stop his racist, fascist agenda,” All of Us co-founder Waleed Shahid, 25, of Brooklyn, told The Daily Signal. “It was negotiation that led to calling African-Americans three-fifths of a citizen.”

The protesters sang, “We stand for our future and together we stand strong.” They also chanted, “Our future is on the line, Chuck Schumer, grow a spine.”

“Democrats lost because they couldn’t tell the truth. Schumer is entirely funded by Wall Street,” Shahid said, adding it would have turned out different if Sanders had been the Democratic nominee. “Sanders inspired the American people.”

Various protesters were arrested in groups of one and two, and taken away. This is revealing about Schumer, said Anna Bonomo, 26, of Hermitage, Pennsylvania.

“Charles Schumer decided to have almost 20 millennials arrested instead of meeting with us and talking with us,” Bonomo told The Daily Signal. “I think that just goes to prove that Wall Street Democrats like him are not here for the people they claim to represent.”

Schumer’s office did not respond to inquiries from The Daily Signal.

The Democratic National Committee did not respond to The Daily Signal’s questions about the state of the party. The DNC chair’s leadership role will be elevated with Republicans holding the White House and Congress.

Electing the Next Chairman

Interim DNC Chairwoman Donna Brazile was shouted down last week by a DNC staffer, who blamed the party’s establishment for Trump’s victory and warned of pending doom from climate change, The Huffington Post reported. The DNC staffer told Brazile:

DNC members will choose a successor to Brazile in February.

Both Schumer and Sanders have endorsed Rep. Keith Ellison of Minnesota, co-chairman of the Congressional Progressive Caucus, to be the next chairman of the Democratic National Committee, as has outgoing Senate Democratic leader Harry Reid of Nevada.

But securing the nomination won’t be easy for Ellison, the first Muslim in Congress.

Former Vermont Gov. Howard Dean, who chaired the DNC from 2005 through 2009 when the party retook Congress and the White House, plans to run for the job again. Former Maryland Gov. Martin O’Malley, who ran unsuccessfully for president, has said he’s interested in the job.

In addition to Trump’s surprising win over Clinton, the Nov. 8 election also saw the GOP hold the House and Senate and make gains among governorships and state legislatures. Trump even won traditionally blue states of Pennsylvania, Wisconsin, and Michigan.

Sanders scolded the Democratic Party in a tweet Monday morning, though he didn’t address the protest group advocating his elevation to Senate Democratic leader.

“I come from the white working class, and I am deeply humiliated that the Democratic Party cannot talk to the people where I came from,” Sanders tweeted.

He later tweeted: “The Democratic Party can no longer be led by the liberal elite. We have to stand up to Wall Street and the greed of corporate America.”

Others attending the conference were House Minority Leader Nancy Pelosi of California and Massachusetts Sen. Elizabeth Warren. Soros’ Democracy Alliance has contributed more than $500 million to get Democrats elected and on liberal groups since 2005.