Notice: Function add_theme_support( 'html5' ) was called incorrectly. You need to pass an array of types. Please see Debugging in WordPress for more information. (This message was added in version 3.6.1.) in /home/kj8d9sfz7jzn/public_html/federalistpress.com/wp-includes/functions.php on line 5831
 Democrats Push Bill Requiring Gun Insurance Or $10,000 Fine 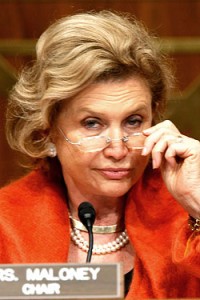 A New York Democratic lawmaker is behind a national push that would force gun owners to buy liability insurance or face a $10,000 fine.

The Firearm Risk Protection Act, pushed by Rep. Carolyn Maloney and seven co-sponsors, follows efforts at the state level to create the controversial new kind of insurance for gun owners.

“For too long, gun victims and society at large have borne the brunt of the costs of gun violence,” Maloney said in a written statement. “My bill would change that by shifting some of that cost back onto those who own the weapons.”

The likelihood, though, of Maloney’s bill gaining any traction is slim. Republicans control the House, and even states where Democrats have sizeable majorities have not approved the insurance idea.

Six states — California, Connecticut, Maryland, Massachusetts, New York and Pennsylvania — have all introduced gun liability insurance legislation over the past few months. None has produced any results.

In Illinois, the House rejected a measure 34-74 that would require people carrying concealed weapons to also carry $1 million in liability insurance. Chicago Democrat Kenneth Dunkin was behind the defeated bill. He said an insurance policy would cost between $500 to $2,000, but Illinois Republicans successfully argued the costs were too high for citizens exercising their constitutional right to carry a gun, and the bill was defeated.

Because there have been so many setbacks on state levels, many have argued that trying to pass a liability insurance mandate on a national level would be near impossible.

Still, Maloney maintains she won’t back down from the fight.

“We have a long history of requiring insurance for high-risk products — and no one disputes that guns are dangerous,” she said in her written statement. “While many individual states are debating this issue right now, it makes more sense for Congress to establish a national requirement to allow the insurance markets to begin to price the risks involved consistently nationwide.”

The push in Congress for a renewed assault weapons ban has faltered. Though it is expected to get a vote as an amendment to a broader gun control package, few expect it to pass. The debate in Congress lately has centered on whether lawmakers can agree to a system of near-universal background checks.