shutdown overnight, arguing his opponents are “far more” concerned with illegal immigration than the U.S. military and protecting the country’s southern border.

In early morning tweets, Trump accused Democrats of playing ‘Shutdown politics’ instead of working to make a deal with their counterparts across the aisle.

“They could have easily made a deal but decided to play Shutdown politics instead,” said Trump, who on Saturday officially marked his first year in office. 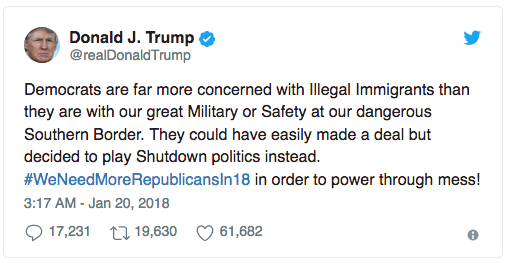 Congress overnight failed to reach an agreement on a temporary spending bill to keep the federal government from running out of money. It has resulted in the temporary shuttering of at least some agencies and services and furloughing some non-essential employees.

The GOP-led House passed a temporary spending measure earlier this week but it failed in the Senate, where the Republican Party has just a 51-49 member majority.

Members remain on Capitol Hill for a rare Saturday session to try to reach a deal and reopen the government, but procedural moves in the Senate will likely mean no final resolution until at least Monday.

“For those asking, the Republicans only have 51 votes in the Senate, and they need 60,” Trump said in another tweet Saturday. “That is why we need to win more Republicans in 2018 Election! We can then be even tougher on Crime (and Border), and even better to our Military & Veterans!”

Republicans have said the stalemate is essentially the result of Democrats wanting the temporary bill to include protections for illegal immigrants brought as children to the United States, considering Trump is winding down Obama-era protections from deportation under the Deferred Action for Childhood Arrivals (DACA) program.

Democrats have said Republican proposals have also come up short on funding for such concerns as the opioid crisis and hurricane disaster relief for Puerto Rico.

Trump on Saturday also tweeted: “This is the One Year Anniversary of my Presidency and the Democrats wanted to give me a nice present. #DemocratShutdown.”