Notice: Function add_theme_support( 'html5' ) was called incorrectly. You need to pass an array of types. Please see Debugging in WordPress for more information. (This message was added in version 3.6.1.) in /home/kj8d9sfz7jzn/public_html/federalistpress.com/wp-includes/functions.php on line 5831
 Dems’ $6 Trillion Lie 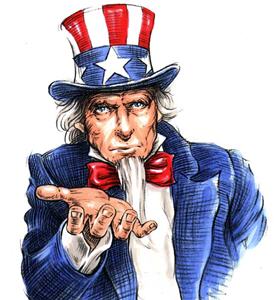 We observed a brief exchange in social media between a liberal and conservative, based on a quote posted by the liberal: “A nation that continues year after year to spend more money on military defense than on programs of social uplift is approaching spiritual death.” Martin Luther King, Jr.

The argument, on its surface, is one that causes the good hearted to stop and reflect. Certainly, we all want to assist those in dire circumstances, and as a society we have made a social pact to protect those who have fallen from a secure position in life. We seek to lift up the weak, and to champion the oppressed.

But is it true that we spend more on defense than on social uplift?

So, starting at the top, what is the duty of the federal government to its citizens? The constitution mandates that the federal government be delegated certain duties by the states and their citizens, duties, like national military defense, that cannot be provided by state or local governments very well. Those duties, and powers to fulfill them, are limited by the constitution. These limited powers enable it to provide for the common defense, free the flow of commerce, coin money, establish weights and measures, provide for immigration, bankruptcies, postal services, patents and copyrights, declare wars, establish a Navy and Army, and to establish duties, imposts and excises to pay for the national government’s activities. That’s it.

Armed with this information we can now make some simple comparisons.  For instance–How much is the defense budget? It is $830 billion, or $0.83 trillion. As anyone can see, defense is only 14% of total spending. But how does defense spending stack up to educational spending? In this same time frame we will spend approximately the same amount on each (see our article of June 11, 2012, NEA Report Card: F).

So if America spends around 14% of its annual taxes on defense, and a like amount on education, where does the remaining 72% go? It goes to healthcare ($1.1 trillion), welfare ($0.8 trillion), public employee pensions ($1.1 trillion), etc. 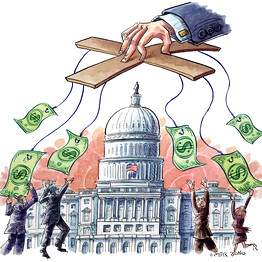 Those on the left have created a myth of government spending that they share among themselves that says that most taxes go to defense spending (which actually pays for the employment of millions of Americans), and social programs get the leftover crumbs. In fact, it is not true at all–it is quite the opposite.

All of those $ trillions are up for grabs to an array of government employee unions, special interests, and administration cronies and contributors, and are funding all manner of social and anti-social programs and movements. This is why Mitt Romney, noting that the federal government borrows 40% of its budget every year (to be paid by a future generation), indicated in the first presidential debate that government spending must be pared back to essentials until the economy returns to full employment.

With all of those fingers in the $6.4 trillion pie (which does not include unfunded obligations), it may be a little difficult for a Romney-Ryan administration to serve the American people without offending a few hogs at the trough.