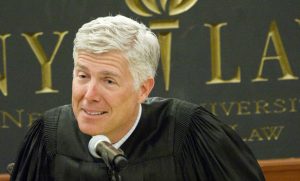 President Trump’s choice to sit on the Supreme Court will get his turn in the political spotlight Monday after laying low for weeks. But what has traditionally been a high-profile confirmation fight is approaching with barely a whimper from the opposition party.

While Democratic leaders have revived their public criticism of Neil Gorsuch in recent days, liberal advocacy groups have all but abandoned efforts to defeat his nomination through public opinion — with scant paid issue advertising or public rallies.

Many progressives lament Democratic senators have been distracted by other ideological fights.

A group led by NARAL Pro-Choice America recently sent a blistering letter to Senate Democrats slamming lawmakers for not putting up more of a fight against Gorsuch ahead of Monday’s confirmation hearing.

“Democrats have failed to demonstrate a strong, unified resistance to this nominee despite the fact that he is an ultra-conservative jurist who will undermine our basic freedoms and threaten the independence of the federal judiciary,” said the letter. “We need you to do better.”

The justices themselves hope the arrival of Gorsuch will end what court sources say has been a tense 13-month period since Justice Antonin Scalia’s sudden passing. The current 4-4 ideological divide has kept the court off its internal workplace rhythms — operating in something of a judicial vacuum, reluctant to tackle hot-button issues that would lead to precedent-setting impact.

Despite the criticism from some on the left, the Senate minority promises tough questions for the nominee.

“If he shows in his answers that he is out of the mainstream as his opinions indicate he very well may be,” said Sen. Richard Blumenthal, D-Conn., “I will use every tool available, including the filibuster, to oppose him.”

“I think Senate Democrats are paying attention in the way that the American people want all senators to pay attention which is to have a robust hearing and really ask Judge Gorsuch these really difficult questions,” said Elizabeth Wydra, president of the Constitutional Accountability Center. “Whether he will be a truly independent judge, whether he will apply the law fairly to all.”

But while left-leaning groups may be less than engaged, conservative legal advocates have put their money behind their message.

Other JCN ads tout Gorsuch’s credentials, and friends of the nominee said he is prepared to face the tough questioning of senators.

His conservative supporters also point to bipartisan support among the legal communities in academia and the government.

“There are going to be people who are ideologically opposed to this nomination come hell or high water, and I think … once [the] American public sees Judge Gorsuch, they realize what a terrific nomination this is,” said Thomas Dupree, a former Bush deputy assistant attorney general. “It’s been difficult  for the opponents of Judge Gorsuch to really stir up resentment and opposition to this nomination precisely because he is so eminently qualified.”

Party sources say Democratic senators will focus much of their attention on seeking Gorsuch’s views on abortion, since he has not ruled directly on the right to the procedure.

“I will not support any candidate who intends to turn back the clock on civil rights, including women’s reproductive rights and LGBT equality,” said Sen. Jeanne Shaheen, D-N.H., who has not said whether she would ultimately vote for Gorsuch.

Other areas of Democratic interest:

Some progressives have actually urged Democrats not to ask any questions at the hearings, as a dramatic rebuff for Republicans refusing to give former President Barack Obama’s high court nominee, Judge Merrick Garland, a hearing or vote.

And they demand a filibuster to prevent Gorsuch from ever getting a floor vote.

Bitter feelings linger. “This is a stolen seat being filled by an illegitimate and extreme nominee,” said Sen. Jeff Merkley, D-Ore., “and I will do everything in my power to stand up against this assault on the court.”