Notice: Function add_theme_support( 'html5' ) was called incorrectly. You need to pass an array of types. Please see Debugging in WordPress for more information. (This message was added in version 3.6.1.) in /home/kj8d9sfz7jzn/public_html/federalistpress.com/wp-includes/functions.php on line 5831
 Did DNC Staffer Seth Rich Send the 44,000 emails to WikiLeaks? 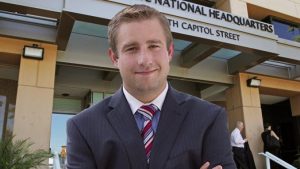 The family of Seth Rich, the Democratic National Committee staffer who was shot and killed in Washington last summer has denied the report that their son leaked more than 44,000 emails to WikiLeaks before his death.

Rich was killed as he walked home in D.C.. He was shot twice in the back but wasn’t robbed. His wallet, cellphone, keys, watch and necklace were all left on him. Nevertheless, D.C. police are calling it a robbery, sparking rumors that they are actively trying to cover up the true reason he was murdered.

Coincidentally, as reported by the Underground Reporter, Seth Rich was also slated to testify in a Clinton investigation. According to the Washington Post, prior to his death Rich was looking into several instances of DNC electoral fraud and voter suppression, and was to give testimony in the case regarding Clinton’s email server — the very scandal kicked off by the Wikileaks data dump.

After announcing that WikiLeaks would pay $20,000 for information leading to the conviction of Rich’s murderer, Assange went on an interview with Nieuwsurr. During the interview, Assange implied that Rich was his source.

Assange: Whistleblowers go to significant efforts to get us material and often significant risks. There was a 27-year old that works for the DNC who was shot in the back… murdered.. for unknown reasons as he was walking down the street in Washington.

Host: That was just a robbery wasn’t it?

Assange: No. There’s no finding.

Host: What are you suggesting?

Assange: I am suggesting that our sources take risks and they become concerned to see things occurring like that.

Host: But was he one of your sources, then?

Assange: We don’t comment on who our sources are.

Host: But why make the suggestion?

Assange: Because we have to understand how high the stakes are in the United States and that our sources face serious risks… that’s why they come to us so we can protect their anonymity.

Host: But it’s quite something to suggest a murder… that’s basically what you’re doing.

Earlier Tuesday, Fox News reported that 27-year-old Seth Rich may have been the one who leaked information about the DNC to WikiLeaks that showed, among other things, that the DNC favored Hillary Clinton over Bernie Sanders in the presidential primary.

The report states federal law enforcement investigators found 44,053 emails and 17,761 attachments between DNC leaders from January 2015 to May 2016 were sent by Rich to Gavin MacFayden, an American reporter and WikiLeaks director based in London who is now dead. That information was found in a FBI forensic report on Rich’s computer done within days of his murder.

Later in the day, Rich family spokesman Brad Bauman told NBC News the Fox News report was bogus. Bauman said Ed Butowsky, a conservative Dallas-based financial adviser, reached out to the family months ago with an offer to pay for a private investigator to look into Rich’s death.

The family agreed and paid Rod Wheeler, a former D.C. homicide detective, to look into the July 10 murder.

“My investigation up to this point shows there was some degree of email exchange between Seth Rich and WikiLeaks,” Wheeler told Fox News. “I do believe that the answers to who murdered Seth Rich sits on his computer on a shelf at the D.C. police or FBI headquarters.”

Bauman, trying to separate the family’s views about their son’s death from the hired detective’s claims, shared Butowsky’s role with NBC.

“We are a family who is committed to facts, not fake evidence that surfaces every few months to fill the void and distract law enforcement and the general public from finding Seth’s murderers,” the family’s statement continued. “The services of the private investigator who spoke to the press was offered to the Rich family and paid for by a third party, and contractually was barred from speaking to press or anyone outside of law enforcement or the family unless explicitly authorized by the family.”

A former law enforcement officer with firsthand knowledge of the investigation on Monday said Wheeler’s claim about Rich’s laptop was incorrect because the device had been searched and yielded no emails related to WikiLeaks. In addition, the FBI never looked over the evidence.

U.S. intelligence officials believe Russia, not Rich, hacked into the DNC and allowed that information to be sent to WikiLeaks.

Wheeler added he believes someone in the D.C. government, DNC or in Clinton’s camp is blocking the investigation.

Rich’s death is one of five deaths in a six week period of individuals who had been destructive to the Clinton campaign. One recent month, for instance, two prominent anti-Clinton activists were found dead within two days.

Renowned anti-Clinton researcher and writer for American Free Press (AFP), Victor Thorn, whose birth name was Scott Robert Makufka, was found dead from a gunshot wound near his home on August 1.

The very next day, Shawn Lucas, who was recently featured in a viral video serving the Democratic National Committee and its now-ousted head, Debbie Wasserman Schultz, with a class-action lawsuit alleging a massive voter fraud scheme for rigging the Democratic primary for Hillary Clinton — was found lifeless by his girlfriend on the bathroom floor.