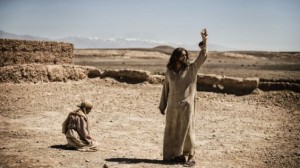 The Portuguese star defends the physical similarity between the actor who plays Satan and the president of the United States.

Although History raised eyebrows for the controversial casting of a President Obama-esque Satan in The Bible mini-series, the actor who plays Jesus calls the situation “hilarious.”

Mohamen Mehdi Ouazanni, who plays the devil, “did a nice job and it was awesome and never — not even for one second — were we even thinking about that, so I think it’s hilarious,” said Morgado. “At the same time, I think it’s just a sign of how successful the show is” because people are paying attention to “silly things.”

Before Sunday’s installment of The Bible, Ouazanni’s resemblance to Obama was first observed on Twitter by Glenn Beck, instantly sparking headlines about the striking physical similarity between the two.

PHOTO: In History’s ‘The Bible,’ Satan Looks Like President Obama

“This is utter nonsense,” executive producers Mark Burnett and Roma Downey said Monday in a statement, noting that Quazanni “is a highly acclaimed Moroccan actor. He has previously played parts in several biblical epics — including Satanic characters long before Barack Obama was elected as our president.”

The husband-and-wife pair stepped out alongside Morgado on Tuesday night for the opening-night gala for The Bible Experience, an exhibit in downtown Manhattan featuring photography from the mini-series as well as biblical artifacts by way of the Vatican and a giant, two-ton crown of thorns hanging from the ceiling. A spooky Old World ambiance was enhanced by dim lighting, a fog machine and Hans Zimmer‘s musical score in the background as guests wandered through a cavernous space built to seem centuries-old with earthy walls and barely any heat circulating.

“This is a gift to New York City,” mused Burnett of the week-long event, a half-museum/half-marketing gimmick. “I bet [people] would come from California to see this this week. People are gonna come from Canada to see parts of the Dead Sea scrolls.”

When asked about the Obama/Satan flap, the veteran reality TV mogul reiterated that Ouazanni was not cast for his Obama-like visage.

“It’s all about the light,” emphasized Burnett. “Can you ask everyone to tweet Jesus? Because we want everyone to spread the light!”