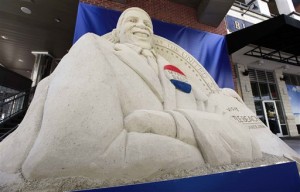 As the Democratic party faithful gather together in Charlotte, NC, to launch their final appeal for votes in the November general election, their new platform has been shaped to maximize support from the fringes of American society.

Indeed, the Rainbow Coalition that has become the Democrats’ base has wandered ever farther from the center-right mainstream of America.

In an all-out class warfare charge up the final hill of this election cycle the Democrats have focused their efforts on diverting voters’ attention away from President Obama’s abysmal record, especially on the economy.

Indeed, democrats have been pouring hundreds of millions of dollars into attack ads attempting to refocus the issues on the GOP challenger’s record, re-written by the Democrats to make Governor Mitt Romney seem like a blood-thirsty capitalist who cares nothing about the average person or women, instead of the successful, hard-working, kind and generous man that thousands who know him personally have testified.

Rather than admitting that their leadership has plunged the nation into the worst economic recovery since the Great Depression, and condemned 23,000,000 Americans to the permanent unemployment roles (most of whom are women, many of whom have descended into poverty) or burger flipping jobs, Obama and his surrogates tell us that all is well, that his policies are working, and that the private sector is doing just fine–although we do need to increase government jobs.

Indeed, rather than propose anything that might put American’s back to work, the Democratic party is offering us higher taxes on job creators, which would gut their ability to create jobs, and the revenue from which would run the government for just 9 days.

They additionally assume that most American’s feel that taxpayer funded birth control and abortions are paramount, and that we need to immediately expand programs that pay for them.

And last, homosexual marriage is being proffered like candy at Halloween. That’s just what working American families need and are clamoring for–government sanctioned sodomy, and just like traditional marriages to be endowed with all of the benefits that are offered to loving couples who enter into a lifetime covenant of fidelity and mutual care, and who take upon themselves the responsibility of rearing children to promulgate society.

The election decision between the traditionally centrist platform of the GOP and the extreme left proposals of the Democrats has never been so clear. This election will truly determine whether America rediscovers its greatness, or continues its slide down that slimy hill into the abyss of every other society that has corrupted itself into oblivion.